Tonight is a Masterchef Elimination. The losers from last night challenge Jacqui, Ashleigh, Stephen, Georgia, Matthew, Jamie, Billie are all up for elimination on Masterchef tonight. The night was divided into three rounds and one person will be eliminated tonight. 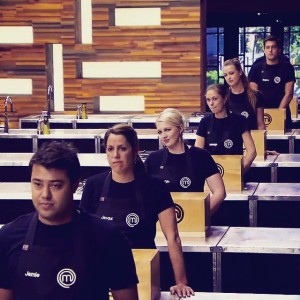 The first challenge was a Mystery Box challenge. The contestants had a box full of scampi, dijon mustard, mandarines, eggplant, lamb, watercress and walnuts and that is all they had to cook with (apart from a limited number of staples under their bench). If they run out of an ingredient that is it.

Jacqui’s first dish was going to be a chocolate and mandarin self-saucing pudding. Georgia was making scampi fritter with a semifreddo.

Matthew was making a scampi linguini. Within 10 minutes, he had his pasta made and was on track.

Ashleigh was making a Chocolate mousse dome with mandarin cream, oil, syrup and crumb recipe. The judges came over to her desk and asked what she was making, she said she was “making a mistake”.

The first dish the judges wanted to taste was Matthew’s creamy scampi pasta recipe. Gary loved two things about the dish, the way he cooked the scampi and the fine ribbons of pasta. Matt said the pasta was amazingly good for that amount of time.

Next was Georgia scampi fritters with a horseradish mayonaise. Gary and Matt said they were “really really good”, George said “wonderful cooking”.

Stephen’s lamb rack with eggplant and mandarine puree recipe was a “bit under”. Gary liked the other flavours though, Matt said if the lamb was cooked right, he would have been safe.

Asjleigh chocolate mandarine mousse had some technical issues. Billies scampi mandarine vinaigarette was a lovely plate of food, but not a great dish.

The judges could only save two contestants in this round, they chose Georgia and Matthew.

It was down to Jacqui, Ashleigh, Stephen, Jamie and Billie. Stephen was in trouble, he used a lot of ingredients in his first dish, he decided to go with scampi and a mandarin beurre blanc. Jamie was making a scampi bernaise, but the judges thought he wouldn’t have enough time. He changed it to a scampi with broth.

At the end of the round, Ashleigh was feeling deflated, she wasn’t sure her lamb was cooked properly.

First to be judged was Jacqui’s Soufflé. As she was walking it to the judges, it was deflating. Gary said that is usually due to there not being enough egg white. It was very eggy. The ganache and biscuit were “spectacularly good” but the Soufflé failed.

Billie’s ice cream sandwiches with walnut shortbread looked amazing. Gary said it was “beautiful chocolate ice cream”. George was impressed that it was done in half an hour.

Jamie’s scampi with walnut crumb and scampi reduction “looked pretty”, Matt said it was delicious, George said it was the “best dish you’ve put up”. Gary agreed, it was the best they’d seen in the kitchen today.

Stephen’s Griddled scampi with a mandarine beurre blanc recipe looked good and the scampi was cooked great, but the beurre blanc was lacking balance, it was almost like a custard.

Ashleigh made Lamb cutlets with an eggplant and mandarin puree, she was nervous. The lamb was cooked well but Matt said it doesn’t quite hit the mark. George said she had to lift herself up, it was “coming across on the plate”.

The two contestants safe in this round were Jamie and Billie.

Round 3 in the Masterchef Elimination tonight was between Jacqui, Ashleigh and Stephen.

Ashleigh was making a mandarin creme brulee and Jacqui was cooking a Lasagna with scampi and watercress oil.

Stephen only had chocolate and mandarin left. He had to make a dessert. He decided on a chocolate mousse with walnuts and candied mandarin.

Jacqui was cooking her scampi, but wasn’t sure how long to cook it. She didn’t want to under or over cook them. Stephen was struggling with his mousse, he had to add some freshness to his dish, but only had 3 mandarine pieces left. Ashleigh was doing well with her brûlée.

Stephen took his mousse out of the fridge but it didn’t look set, he couldn’t cornel it, it looked terrible.

First to be judged was Ashleigh’s Mandarine Creme Brulee. Gary said he really liked it, it was delicious and the crumble was really tasty. Matt said it was “absolutely impeccable”. George said it was a good dish, she is a talented cook, she just needs confidence.

Next was Jacqui’s Scampi lasagne with walnuts and watercress recipe. Gary said the scampi was “absolutely brilliant” but the lasagne sheet was too thick. Matt said his scampi was overcooked, it was going “mushy” on his plate.

Finally Stephen’s Chocolate Mousse with walnut praline and mandarine was up. Gary said it was “so simple but it tastes delicious”. George said the quality of the chocolate and the lightness of the mousse made it really good. Matt said he thought there was no way he would have a chance, but that mousse was good, he was suprised.

Who went home on Masterchef tonight?

Jacqui was eliminated from Masterchef tonight.