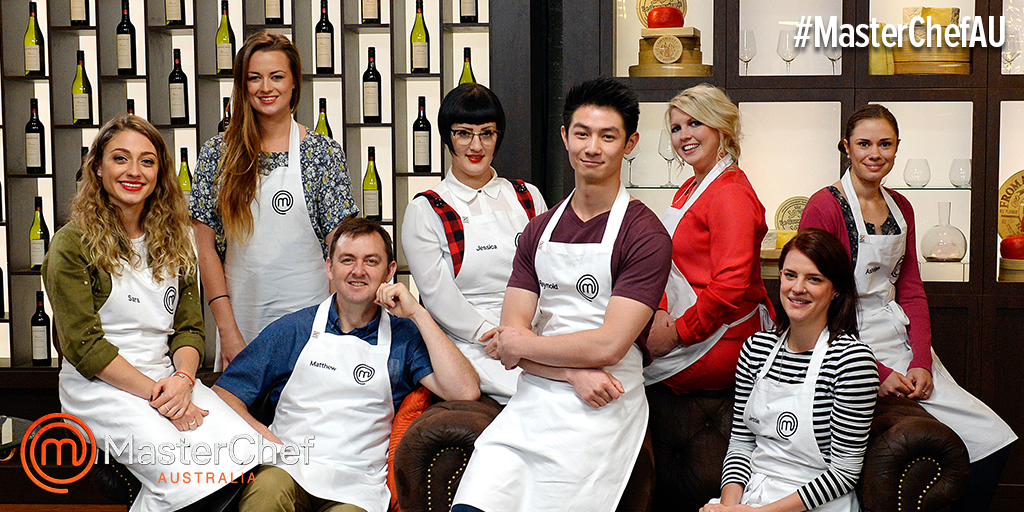 Matt had the “use everything” mystery box, he was top 3 in this challenge. He was making a better version of the same dish. It was a tortellini with blue cheese and star anise with a bacon crumble.

Sara had Maggie Beer’s garden mystery box, she had to forage outside for ingredients. She was making an eggplant parmigian.

Jessica had the “mystery” mystery box from last week, it was a hard one. After 15 minutes, she didn’t know what she was doing, she wanted to make a dessert, but couldn’t come up with anything.

Georgia had week two’s Mystery box. She was making lime and coconut churros.

Reynold had Heston’s mystery box, last time he was in the top 3. But this time he decided to make a dessert.

Billie had Poh’s mystery box, this is what she was hoping for. She was doing another dessert, lime and curry leaf parfait.

The first dish to be tasted belongs to Matthew. He has cooked a mystery tortellini, half of the tortellini have grilled fig inside and the other half have the blue cheese and apple. Gary says the pasta is deliciously thin, he loves the bacon crumble. Matt loves the idea that you get all the flavours together, it’s a dish without flaws.

The next dish to be tasted belongs to Reynold. He has cooked macadamia and salted caramel ice-cream. Reynold is not happy with his dish. George says he loves the quandongs and they make the dish.

The final dish to be tasted belongs to Billie. She has cooked a curry leaf and lime parfait. George says Masterchef is all about ordinary people doing extraordinary things with food, and this dish is extraordinary. Matt says the dish is just beautiful and that it is the dish of the day. She wins the advantage for today.

The advantage for today is to choose from earth, wind or fire. She has to chose one of the themes and everyone has to cook using the theme. Billie has chosen the theme of earth. The judges want them to be creative and inventive, it not only needs to look good but it needs to taste good. They have 60 minutes and all of the dishes will be tasted. The top four dishes will go into the immunity challenge. The bottom four will go into the pressure test.

Billie is going to cook a crispy skin duck and is cooking some turnips.

Jessica is going to cook a smoked duck breast with some mushrooms.

Matthew is going to cook some beetroot gazpachio or borcht as his wife is Polish.

Jessie is going to make a smoked yoghurt parfait with a buttermilk snow.

Ashleigh is making a carrot puree and carrot vinaigrette with quinoa.

Reynold is making a chocolate dish with mousse rocks.

Sara is making a squid ink eye fillet with leeks.

Georgia is making a strawberry frozen yoghurt with a crumb and fresh strawberries.

The judges question Sara’s use of the squid ink, she decides to use it anyway.

Jessie is inspired by a chat with Matt to change her dish from sweet to savoury.

There is only 5 minutes left.

Sara is piping her custard onto the plate and she notices that it has split. She has no time to fix it so she leaves it on the plate.

Jessica is worried as her duck breast is undercooked.

Georgia’s dish is first to be tasted. She has cooked a strawberry patch, strawberry frozen yoghurt with a red soil. George says it is delicious and creamy and strawberrish. Matt says it puts her in the front.

Billie’s dish is next. She has cooked a pan seared duck breast with turnips and a blackberry vinaigrette. Gary says there is a lot of bitterness in the turnips.

Sara’s dish is next to be tasted. She is really worried about her custard that has split. She has cooked an eye fillet with smoky leeks and a crumb. George says the beef is cooked well but there is a problem with the custard. Matt likes the beetroot gel and crumb.

Reynold is up next. He has cooked a pile of dirt with a couple of rocks, chocolate, hazelnut and coffee flavour. George says he loves it. He felt like he was eating a pile of dirt. Gary says he has done well again.

Ashleigh is next. Ashleigh has made a duck breast with carrots and dill. Gary says it is great cooking. However there are two negatives, the duck breast’s skin was overcooked and the duck was undercooked.

Jessica’s dish is next to be tasted. She has cooked a smoked duck breast with a beef and mushroom broth. The judges question the presentation of the dish. Gary says there are winning elements in the dish, he says the leek wasn’t cooked enough. Matt says the duck was undercooked and the sauce was too thin. Jessica is quite emotional about the criticism she has received.

Jessie’s dish is next. She has cooked a cold winter ground with yoghurt and a blackberry sauce. Gary says the flavours are great. He says the smoky yoghurt is spot on. Matt says he gets the feeling of a cold day when eating it. The judges are surprised that it was so good.

Matthew’s dish is next to be tasted. He has cooked a borscht gazpacho with mushroom, bacon and dill. George says he needs to commend him on the presentation but the soup could be more refined. Gary says it is yum but he tastes a metallic flavour. Matt says maybe there is too much vinegar.

The three outstanding dishes today were all desserts. They belonged to Reynold, Georgia and Jessie. The last dish that is safe belongs to Sara.

Reynold, Georgia, Jessie and Sara are all safe and will be competing for an immunity pin.

Ashleigh, Matthew, Jessica and Billie will all be going to a masterchef elimination pressure test.