Tonight’s Masterchef challenge was a mystery box challenge. It was the Masterchef top 10 and down to the business end of the competition. The mystery box tonight contained: 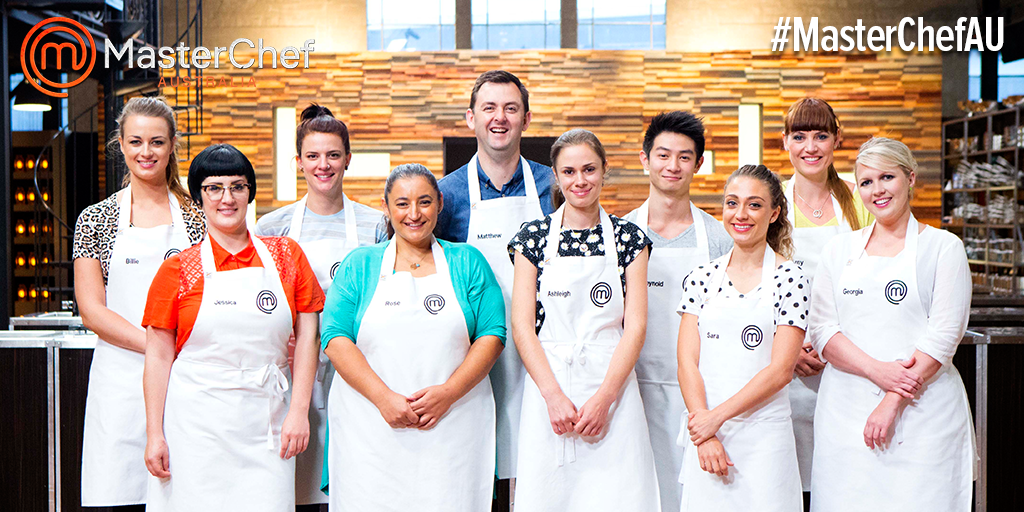 George said he had only ever cooked with a few of the ingredients himself. The contestants had to use at least one ingredient as the hero of their dish.

Jessica tried to use the sorghum, she put it in some oil and it went up in flames. Jessie was also using the sorghum, she noticed it was a bit like popcorn and puffed up, she was making a puffed sorghum parfait.

Rose was using the achacha and the coffee flour, she made a coffee flower pastry and was making an ant praline.

Reynold was making pheasant breast. The judges came over and asked how he prepared the breast. He showed them, it was going to be dry, he had cooked it after removing the bone, which would try it out.

Jessica was making pheasant leg stuffed with armenian cheese. The judges asked how it would melt. She didn’t think it would, she decided to cook it in the pan, Matt came over and thought it was brilliant.

Amy was smoking the pheasant with the coffee flour. She was making a Velouté to accompany it. Billie was making an ant semifreddo.

With only a few minutes to go, all the contestants were rushing to plate up. They all got their dishes up but only 3 dishes will be tasted.

The first dish to be tasted was Billie’s Ant caramel farait with popped sorghum and ant coffee tuille. The judges loved the plating. Gary absolutely loved it, he said it was “totally delicious”. George said it was a clever, clever dish.

The next dish for tasting belongs to Jessie. She has made a puffed sorghum parfait with a caramel sauce. George says it’s gorgeous and he wants to eat more. It’s creamy, salty and sweet. Matt says it’s clever and its a classic caramel popcorn, he loves it.

The final dish that will be tasted belongs to Rose. She has made a coffee flour tart with an achacha curd. The judges get Rose to taste her own dish. They said it is delicious. Gary likes the soft buttery pastry and the curd.

The winning dish is Rose’s. Rose gets today’s invention test advantage. Rose gets to choose, meat, poultry and eggs or dairy. The second choice is European ingredients or Asian ingredients. The final choice is time, 30 minutes or 45 minutes. If Rose choses one, then the other item will not be in the pantry for the challenge.

She has chosen meat, Asian cuisine and 45 minutes. There will be no dairy products available in the pantry and no European ingredients will be available.

Georgia is making a chicken and sweet corn soup. She has accidentally picked up a duck instead of a chicken so she runs back to the pantry to replace it.

Sara is making a poached chicken breast with a black sesame paste and spring onion oil.

Reynold is making a beef rendang.

Matthew is making a beef dumpling in a spicy beef broth.

Jessie is making duck breast with a caramel and pickled daikon.

The judges come past Matthew’s bench and tell him that he won’t get his dish done on time, he is going to persist with his dish anyway.

Rose feels like she is running out of time also. She overcooks her first scotch egg so she puts another one in to cook.

Matthew comes to the realisation that he is not going to be able to cook his dumplings in time. He is trying to think of a way to modify his dish. He is making a beef broth with beef in it. He’s worried it’s not inventive enough.

Reynold is worried that his beef has not cooked properly.

In the meanwhile, Rose has overcooked another of her scotch eggs.

First dish to be tasted in the invention test tonight was Jessie’s pan seared duck with bitter caramel and pickled daikon dish. Gary said it was “very pretty”. It was a great dish, he said the duck was cooked beautifully and the freshness from the mandarine really added to the dish. Matt agreed, it was “just great cooking”.

Next was Rose’s Thai style scotch egg with mushrooms and dipping sauce recipe. The egg was runny. Matt said it had a beautiful flavour. We are unsure how this met the brief of “asian”, but the judges didn’t mention that.

Ashleigh’s miso was lovely, Billie’s beef with thai salad was good and had great flavours. Amy’s poached chicken salad was refreshing and the judges loved how it was poached in cocnut.

Georgia’s chicken with sweet corn soup. Her idea was that she would pour a raw egg into a soup and it would cook it. It didn’t work. Gary said it was very wholesome, but it was a simple dish. George said he too didn’t have a strong ability in cooking asian.

Next was Jessica’s black sesame tare sirloin with spicy nori salt and wasabi relish. George said he tastes “japan”, the beef was cooked perfectly. Matt said it had some real vision in it, all the elements were delicious.

Reynold’s beef rendang recipe was next. He needed more time, he said his dad usually takes 3 – 4 hours to cook. Gary said the beef was dry, the sambal needed to be more complex. George said it was a bad day for him in the kitchen. Reynold was disappointed with himself.

Sara was next. Her poached chiken with black sesame paste recipe. He also used the poaching stock as tea to taste before the tea. The judges loved it. Gary said we don’t see a lot of black sesame, and it was great. The chicken was perfectly cooked. The broth was very aramatic and Matt said the spring onion oil was delicious. It was a really beautiful combination.

Matthew cooked a beef in a beef broth recipe. He wanted to do a dumpling, but it hadn’t worked out. George said neither he or Gary would even be able to make a gyoza or dumpling skin in 45 minutes. Matthew was embarrassed with the dish. The judges didn’t think it was great.

The three top dishes tonight, that will be going to an immunity challenge are: Sara, Jessie and Jessica

The three bottom dishes, and the three contestants going to the bottom 3 were: Matt, Reynold and Rose