Tonight’s Masterchef Elimination is between the losing red team from last night’s challenge. It is Rose, Matthew, Billie, Sara and Jessie who are in the elimination tonight. Billie had an immunity pin, she decided to use it tonight to save herself.

The challenge tonight was a pie challenge. It had to be a pie that you could cut slice from and the contestants had 90 minutes. 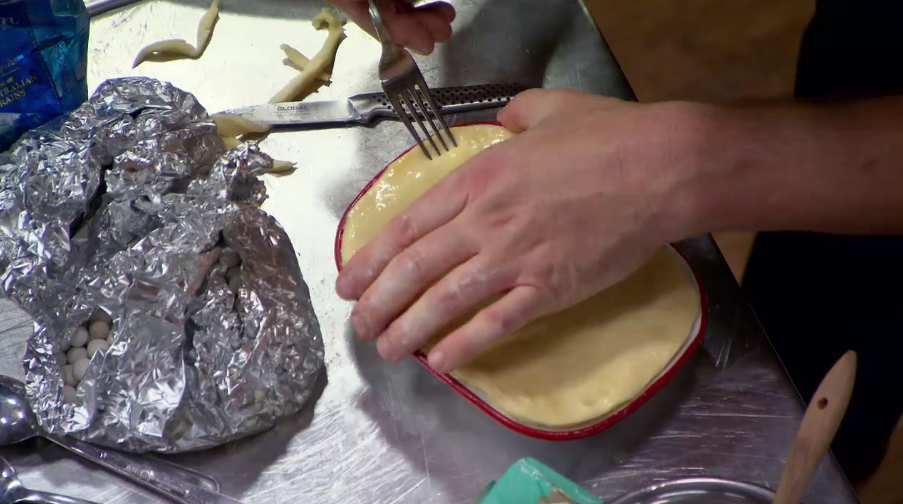 Sara finished her pastry  but it was way too dry and crumbly, she rolled and rolled it and managed to get it into a usable state.

With 40 minutes to go, Matthew was blind baking his pastry. Jessie hadn’t started her pastry, when she did, she mistakenly put the yolk in first and had to start again. She was kicking herself that she didn’t start this earlier.

Sara took her pastry out of the oven and it was crumbling, she just had to get them in the oven. Matthews were in, Rose and Billie were last to get them in.

With seconds to go, the contestants all got their pies out. Sara’s was a bit crumbly and Rose’s looked undercooked and Jessie’s was a bit of a “train wreck”. 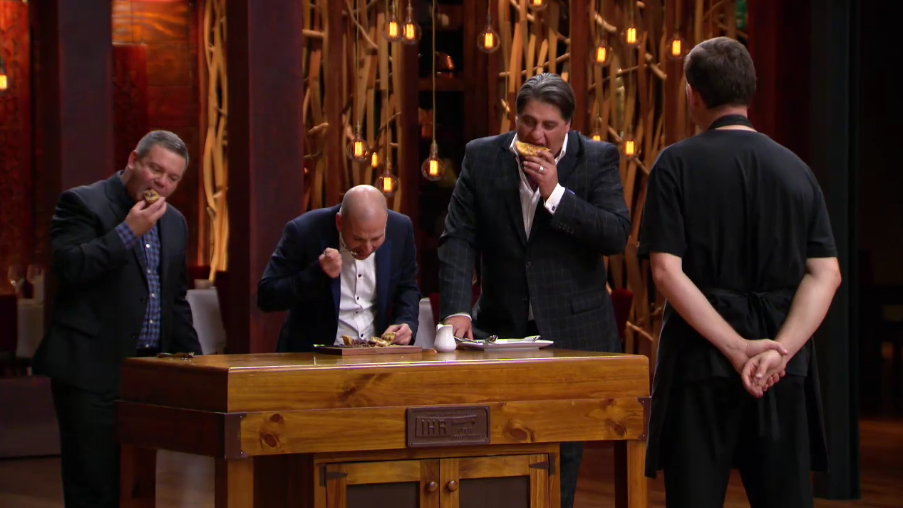 The first pie to be tasted was Matthew’s beef and red wine pie with bacon and mushrooms.. Gary said it looked “absolutely amazing”, George said “you could put it on the cover of a magazine”. Matt said it was “one fine pie”, it was “absolutely delicious”. George also said it was “the best pie i have ever eaten on this show in 7 years”. He was safe.

Jessie’s beef, bacon and red wine pie with a parsley and pea sauce. The judges cut her pie. Her pastry was raw. It was heartbreaking for Jessie. Gary said the sauce was great and there was lots of flavour, but the pastry was the downfall.

Finally, the judges tasted Sara’s Chinese chicken and sweet corn pie with smashed cucumber salad. The judges had to be very careful, the pastry was so short it was crumbling. Gary said he was hoping that the filling was enough to forget about the pastry, but it was hard. The salad didn’t do anything for the dish. Matt said, as far as a pie that they could cut and hold up to show the world, it falls short.

The worst dish of the day was Jessie’s. Rose and Sara were safe.

The judges told Jessie there was a second chance tonight. She had to compete against an ex-contestant.

The eliminated contestants came back in. They had to cook against each other and the winner will cook off against Jessie.

Kristina is cooking a prawn mousse raviolo with a prawn head bisque.

Kha is cooking the dishes that got him eliminated, quail and a salad.

First up for tasting is Melita’s dish, shes’s cooked a strawberry mousse cake.

Next is Fiona, she’s cooked a cranachan.

John is next, he’s cooked a pork kilawan.

Next up is Jacqui, she’s made a chocolate mousse cake.

Ava is next, she’s cooked an eye fillet with salsa verde.

Anna is next, she’s cooked a bouillabaisse.

Kha is next, he’s cooked a quail with Vietnamese salad.

Kristina is up next, she’s cooked a poached snapped fillet with a prawn mousse raviolo. The judges really love the dish.

Stephen is next, he’s cooked a lobster tail with mussels and a lobster sauce. The judges loved the dish and said it was delicious.

It’s time to reveal the best dishes. They belong to Stephen, Kha and Kristina. The contestant who gets to cook against Jessie is Stephen.

Next round is Jessie cooking again Stephen. They can cook anything they want, they have 60 minutes on the clock.

Stephen decides to cook a dessert. He is making a lemon verbena parfait.

Jessie is cooking a lobster tail with poached carrots and dill mayonnaise.

Stephen is feeling the pressure and is running out of time. He is worried his jellies will not set.

Jessie is making a butter emulsion to cook her lobster tail in.

Stephen is having trouble with his cooked rhubarb. It is not working out how he wants it to. He checks on his jellies and they are freezing instead of setting.

There’s 5 minutes to go and it’s time to start plating up.

Jessie checks her lobster tail and it’s undercooked. She places it back in pot to cook further.

There’s 2 minutes to go. Jessie checks her lobster tail again and slices through it. She is relieved that it is cooked.

It’s time for judges to taste the dishes.

First up is Stephen. He has made a lemon verbena parfait with a rhubarb carpaccio and nut crumb. Matt loves the combination of the lemon and fennel. Matt says the problem is that the rhubarb has no acidity or tartness. George says well done on the parfait. Gary says it is missing fruit for him.

Jessie is next up. She has cooked a butter poached lobster with poached carrots and a dill mayonnaise. Gary says it is delicious. He thinks the pickled fennel and the lobster go beautifully together. George says it is so creative and yum. Matt says its the simple ideas of carrot, dill and lobster that works so well together.

Nobody was eliminated from Masterchef tonight.