Tonight’s Masterchef Elimination was a pressure test between Ashleigh, Kristina and Rose. Who was eliminated tonight? The Masterchef contestants must cook Kylie Millar’s Toffee Apple Recipe. 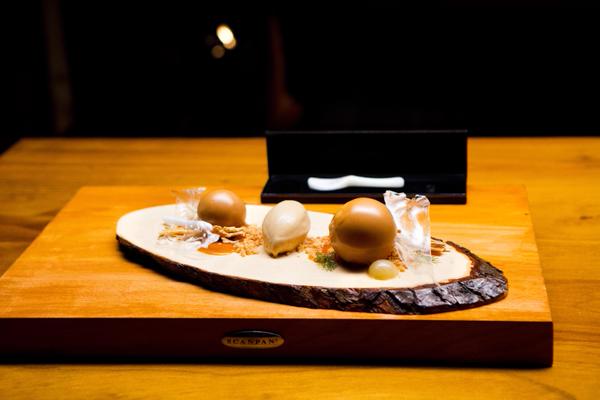 It was a very technical dish, it had everything, including an eggless meringue, gelato and an edible spoon made of sugar. The toffee apple recipe has 14 elements and 28 steps and the masterchef contestants have 2 and a half hours to replicate the dish and 5 minutes to plate it up at the end.

Ashleigh was off quick, she had started her meringue and caramel straight away, she was multitasking like crazy. Rose was taking it one step at a time and Kristina was going as fast as she could.

The first mistake was Kristina, she left her caramel alone, but when she ran back it had burnt, she had to start it again.

Kristina seems to be falling behind the other contestants, she has not been multitasking.

Rose is concerned as she has forgotten to make her edible spoon.

Ashleigh seems to be really enjoying the challenge as she loves cooking desserts.

Kristina decides to make her spoons before she has finished her spheres. There is only 10 minutes remaining on the clock.

Kristina is missing quite a few elements to her dish. She will not be able to plate them up.

Rose doesn’t think she will get all the elements on the plate.

Ashleigh is feeling confident that she will get all the elements on the plate.

Time is up and Rose has not made her spoon. Kristina doesn’t have any jelly or chards.

It’s time for the contestants to plate up for the judges.

First up is Ashleigh. She has 5 minutes to plate up and then walks her dish into the judges. The judges were impressed that she was able to get everything up on the plate. Gary loves the consistency of the mousse. Kylie says it looks lovely. George loves the apple.

Rose is up next. Gary and Kylie love the mousse. Gary also loves the caramel sauce. Rose has taken the white chocolate element too far, which makes her dish not consistent with Kylie’s.

Kristina was eliminated from Masterchef tonight.