This week is Heston week on Masterchef. Tonight was a Mystery Box Challenge and the ingredients were from Australia’s first cookbook. 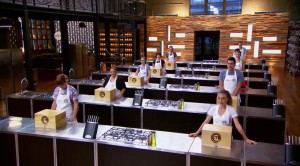 Which contestants will be going to elimination tomorrow? It contained macadamia nuts, finger limes, lemon myrtle, bush tomatoes, warrigal greens, quandongs, wallaby and emu. The contestants must use at least one of the ingredients. The top three dishes will be tasted and the winner will receive an advantage in the invention test round. 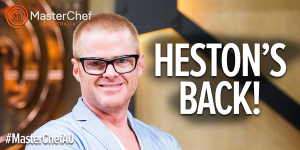 Sara was overwhelmed, she had never cooked with a lot of the ingredients. She decided to go with the emu and sous vide it. Heston came over, he said with emu you want to bring it up to heat quickly. She decides to pan fry it instead.

Reynold was making wallaby with warrigal greens and a macadamia puree. Heston came over and told him just to check his meat was cooked, it was a bit under, so he put it back in the oven.

Matthew was taking his parfait out of the blast chiller and out of the tins, Heston was there watching. The first one failed, it was still runny. He grabbed the second one. That came out much better, he was relieved, he got it plated up.

The first dish the judges tasted was Reynolds. His wallaby with macadamia puree, warrigal greens and quandongs recipe had beautiful balance. Heston said he “nailed it” with the macadamia nuts and finger limes. Gary said the wallaby was cooked beautifully.

Next was Sara’s Lemon myrtle inflused emu with sweet and sour bush tomato sauce recipe. Heston thought it was beautiful. He said the meat is hard to get a crust, her fried pieces gave the dish a good crunch element.

Finally, the judges tasted Billie’s macadamia syrup cake with caramel macadamia parfait dish. Heton said it looks like the dish that could be a train wreck, but it works. He said it does feel like the taste of australia. Gary thought that using the ricotta to make the caramel was really clever.

The winner of Round 1 was Sara.

As Sara won the first round, she was able to choose the core flavours for the dish. They were all cocktails. The first choice was an espresso martini, the second choice was bloody mary and finally a whisky sour. Sara chose the whisky sour.

Stephen started making a whiskey cured baramundi, the judges came to his desk, the look on their faces were priceless. They were concerned it wouldn’t be anything like a whisky sour.

Sara was making a whisky sour tart shots. They were going to be a whisky sour tarts that where small enough to ‘shot’. She was a bit nervous and there was a lot to do, she over-whipped her meringue and had to start it again.

Amy was making a deconstructed whisky sour tart. Heston said they had to see something ‘inventive’ in the dish.

Georgia was making a whiskey sour jelly with meringue curd. She also needed to have some invention in her dish.

Matthew was making a “dessert pasta”. The orange jelly was a “ravioli” with a marscaponi filling.

Rose was making an orange mousse with a lemon jelly.

Ashleigh was making a trifle. It was a challenge for her, she doesn’t drink so is not sure of the flavours.

Sara was in trouble, her elements were not coming together.

Jessica was making a spiced quail.

Amy had problems plating up, she left a few elements off, so did Stephen. Sara walked off crying, she wasn’t happy with the dish. George gave her a bit of a pep-talk.

The first dish to be judged was Georgia’s Whisky sour jelly with meringue and lemon curd. Her jelly was ‘semi set’. The judges taste her dish and comment that there are lots of sour and fresh flavours but the jelly has collapsed and they can’t taste whisky.

Next up is Matthew. He has made a whisky sour ravioli. Heston says there is an excitement in the dish, can taste the whisky and the sourness and it’s visually exciting.

Amy is next. It’s a deconstructed lemon tart. Heston says the best thing about it is the pastry but it doesn’t connect to a whisky sour.

Next up is Jessica. She has made a whisky and bitters marinated quail with pearl barley and ginger smoked foam. Heston loves the spice mix on the quail and it is cooked well. Gary says the connections are very strong to a whisky sour.

Stephen is next. He has made a pan fried barramundi with a beetroot puree. Matt asks where the sour element is and Stephen explains that he forgot to put the lemon segments onto the plate. Heston says he gets no connection to the whisky sour. George says its a nice dish but no connection to a whisky sour.

Next up is Ashleigh. She says she doesn’t drink. She has made a whisky sour trifle with apricots and rosemary. Heston loves it, it’s delicious and complex. He says it works on all levels.

Sara is next. She knows she hasn’t cooked well and is expecting the worst. She has made whisky sour pies. Heston says he gets the whisky and meringue but that it needs more sourness.

The next dish up belongs to Rose. She has made a lemon and whisky jelly with an orange mousse. Heston says she has nailed it. Matt says it’s the bang of acidity that makes the dish. George guarantees her that she’s not in the bottom three.

The three top dishes belong to Ashleigh, Rose and Matthew.

The bottom three dishes belong to Stephen, Georgia and Amy. They will be going into an elimination tomorrow.