Tonight’s MasterChef Elimination was an Anna Polyviou Dessert Challenge. Who will be eliminated from MasterChef tonight? Anna Polyviou is the Executive Pastry Chef at the Shangri-La hotel Sydney. The dish was a Carrot Cake recipe which won the best dessert of the year in Australia. 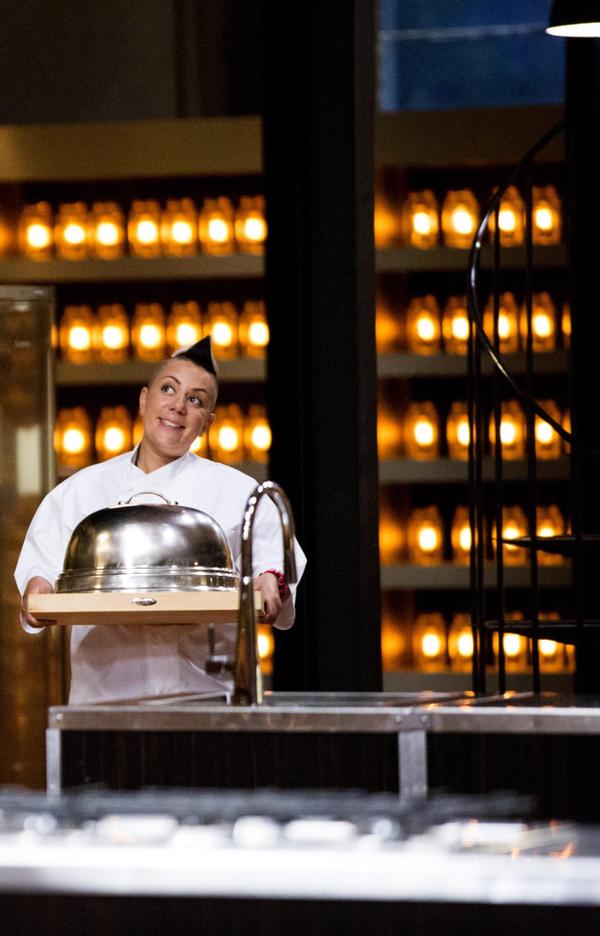 It was a tough recipe, the contestants had 3 hours to recreate the dish. Rose was the last off the mark, having studied the recipe for abotu 30 minutes, but Fiona was the first to make a mistake. Her scales were set to ounces not grams and she noticed once she had already started the cake element.

Fiona was struggling with her cream, Anna and Gary came over and explained the process to her. She picked up her game. Rose was trailing behind, having taken so much time to read the recipe.

With half an hour to go, Fiona and Jacqui were starting to assemble the cake. Rose was far behind. She really needed to pick up the pace. There weren’t too many mistakes up until this point. All the contestants were following the recipe.

It is time to pour on the caramel. Jacqui’s looks quite dark and Rose’s is quite thick. Anna gives her a tip to tap the cake to make the thick caramel coat all the sides.

The judges are concerned that Fiona is struggling.

Anna is excited to see all the contestants putting the “graffiti” on their cakes however Jacqui’s doesn’t look quite right.

Time is up and all of the contestants seem to have done a pretty good job of getting their cake on the plate although nobody has had time to make their tempered chocolate.

The first dish to be tasted is Rose. She is disappointed she didn’t get time to put her cream cheese foam on the dish. Anna is very happy with the dish and said she has done a good job. Gary likes it too. George loves the sorbet.

Fiona is up next. She is also missing the tempered chocolate. Anna comments that the cream cheese and sorbet both taste weird. Gary says there is no contrast in the layers.

Jacqui is the last contestant to bring her dish to the judges. She is missing her tempered chocolate too. As George cuts through the cake the caramel sticks to the knife and it looks as though her caramel is overdone. Anna says that beside the caramel being taken too far, she has done a great job. George says he would be very happy to receive this dessert in a restaurant.

Fiona was eliminated from MasterChef tonight.