Spoiler: The result of this challenge is given away below

Both teams put up impressive first course, the edible centrepiece. There was fake dirt, grass and carrots on both sides. The red team had a garden theme and made trees, toffee apples and a sponge. The red team was a bit sickly sweet where you would “nibble a bit” and let it sit.

The blue team also had a garden theme they had chocolate, carrot marshmallows and chantilly cream. Their edible centrepiece was more balanced with both sweet and savoury elements.

Red team made thyme and black pepper biscuits with crumb. They decided to use salt to make the dish more savoury by including salt in the biscuit. Unfortunately, the dish was too salty they used the salted biscuit as the crumb which made the entire dish too salty.

Blue team made thyme and apricot pana cota. The thyme was subtle in the pana cota but used well. The pana cota was a little too set but this dish was the choice for round 2.

The red team decided to serve their sorbet at the table by freezing it in liquid nitrogen. Unfortunately they froze it too much in the bowl and the theatre turned to panic as they couldn’t get enough sorbet for the dishes. Although there were downfalls in serving, it was red teams best dish of the day.

The blue team’s mousse wasn’t as airy as it should be and the ginger element was a lacking a bit.

In round four, the blue team cooked a pear, lavendar and grape cigar with a cubin cocktail and blue cheese mousse. The cocktail created an interesting balance for the dish. 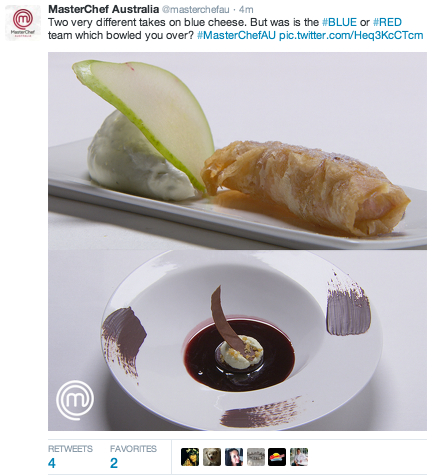 The blue team’s centrepiece was fantastic. The pana cota had a great presentation and taste. The third course wasn’t as impressive as the blue team and the final course was

The red team’s first course was haphazard. The second course was too salty. The third course had a brilliant crumb and the final dish, pouring the red wine syrup at the table was spectacular and was the dish of the day.

The judges liked the journey they were taken on with the blue team. The blue team won tonight.