Tonight on Masterchef 2014 was the chilli immunity pin challenge. Sarah, Tash and Brett will cook off in the first challenge with the winner facing off against the guest chef.

The contestants were able to choose from the following chillies with different amounts of time to cook their dish:

The contestants did a knife pulling challenge to decide the order they would choose their chillies.

Sarah had first pick and chose the Habanero with 30 minutes to cook her dish. She decided to cook pork mince samosa with a chilli chutney and raita.

Tash was the second to choose and chose the Pequin pepper with 20 minutes to cook her dish. She took a risk to cook a dessert with chilli. Her dish was a pineapple and chilli sorbet with macerated fruit.

Brett was last to choose and picked the Cayenne pepper with 15 minutes to cook. He decided to cook muscles with white wine and chilli, chorizo and herbs.

The contestants raced to the end but they all got their dishes up.

First to be judged was Tash. George loved the dish. I twas fresh, the sorbet was cool then the heat hit. Kylie also loved it, a very clever dish. Matt was happy with the complexity of the flavours and textures on the plate.

Second to be judged was Sarah. Her chutney unfornately turned into toffee with the sugar setting. The samosas didn’t have much chilli in them so the flavour was lost.

Finally Brett was judged. He left the beard on one of the mussels. His dish was nice, for a non-chilli challenge, it was lacking the chilli flavour.

Tash won the first round.

Tash had to cook off against Benjamin Cooper of Chin Chin in Melbourne. He got to choose the core ingredient, either herbs or spices. Ben chose spices which meant that the herbs will be removed from the pantry and can’t be used in the challenge. 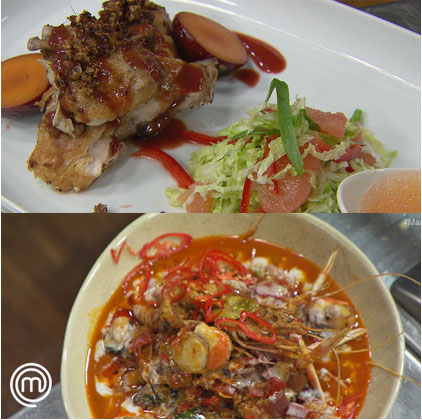 Tash was going to cook deep friend chicken. She started with a spice mix but wasn’t happy with it so rubbed it on a test chicken and cooked that while creating another spice mix. She realised she’d forgot some ingredients in the second batch so had to make a third.

Ben took a risk and decided to cook a seafood stew that he hadn’t cooked for about 18 years. He decided to leave the bones in the fish for a ‘rustic’ feel to the dish.

The first dish to be judged was Tash’s fried chicken with plum sauce. It was a “good dish”. George said it was super fresh, super flavoursome and super healthy. He ate the whole plate. Matt thought the plum sauce was absolutely perfect. Gary picked up on the star anise and said the chicken was cooked perfectly.

The second dish was Ben’s. His Brazillian seafood stew was complex and really fruity. Matt thought the bones were meant to be in the dish, he thought it might need some rice, but then the bones would become a problem. It was “comfort food at its best”.