What was in Marco Pierre White’s Mystery Box Challenge? Tonight is the first night of Marco’s week on Masterchef. We know that he absolutely loves Laura’s dish tonight. 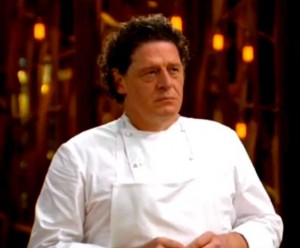 Here is what is in his mystery box:

Lots of contestant were making raviolli and there where a couple of bisques. The contestants where very intimidated by Marco. There were a lot of firsts. Kira had never made raviolli before. Amy made pan fried lobster with a crispy fried egg yolks. She hadn’t made friend egg yolks before and the first try didn’t come out very good.

Laura also made raviolli. She said she had made raviolli many times before and was confident, but her first batch exploded when cooked. Her second batch, cooked right in front of Marco came out perfect.

Marco smells all the dishes before choosing which dish to taste.

The following dishes were tasted:

Emelia – Lobster ravioli with a picked carrot and a smoked egg yolk. The sauce and the lobster were perfect. The bisque was cooked well.

Kira – Lobster ravioli with butter poached lobster with a lobster tail and a coriander sauce. Marco complimented her on her ravioli. He said it was a very good dish. Gary said it was very clever and very well done.

Brent – Lobster Bisque with pan fried lobster. He had used vinegar because the port was sweet but Marco was confused why there was vinegar in there at all

Amy – pan friend lobster with tomato and ginger sauce with a deep fried egg yolk. Marco said that the sweetness of the tomato with the ginger worked. He thought the dish didn’t need the egg because it didn’t complement the dish.

Laura – Pasta en brodo. Marco had no complaints, the dish was very nice. George and Gary both loved it.

Marco wanted to taste one more dish. He chose Tracy’s lobster broth with coriander ravioli and lobster medallion. She was apologised if her lobster was undercooked, but it was perfect. Her bisque had “real flavour”.

He had to choose one winner. The winner of Marco’s mystery box challenge was Laura.

The invention test was an Italian challenge. Laura was able to choose the core ingredient out of Porcini Mushrooms, Prosciutto or Bortargo. She chose the porcini mushrooms. The contestants were only able to choose 5 ingredients from the pantry and they were only allowed in there once.

The contestants had 1 hour to cook.

Ben decided to cook chicken and mushroom stuffed ravioli with hazelnut butter (burnt butter). Byron was going to make spatchcock in a balsamic reduction with some zucchini and mushrooms. Tracy made a duck neck sausage. She had to cut and clean the duck neck then make the filling so she was worried it won’t be done in time. Marco thought it was a very clever dish, but it really needed to be cooked or it would be a bottom 3 dish.

Amy was cooking capers with the porcini mushrooms, all the judges thought this was a terrible combination but Amy thought it would turn out.

First up was Tracy’s duck neck sausage. Marco said it was “beautiful”. The duck was cooked perfectly. Marco thought it was extraordinary that she was able to cook it in an hour and she should be very proud of herself.

Next was Tash’s gnocchi two ways with porcini cream sauce. The gnocchi was rubbery and hard and the sauce was overcooked. They weren’t good at all. She was in trouble and she knew it, she was ashamed of the dish.

Brent made a lasagna. It all worked but he didn’t have enough time

Amy pasta with porcini and capers. if she left the capers out it would have been a good dish. the judges didnt like the capers at all

Georgia’s fettucinni was “way better than it looked”. Byron cooked “baby chicken” with porcini and balsamic red wine reduction. George got bones, lots of them. Marco said it was like a horror dish and pulled him aside. He said he made more mistakes than any other chef and said he made them by trying too hard and Byron shouldn’t be intimidated by other cooks.

Laura’s dish was “wow”, it was light, delicious and the porcini was subtle. Marco said when he was her age he “could not have cooked a dish to that quality”.

The following contestants where through to the immunity challenge: Tracy, Laura and Ben.

The following contestants were going to elimination: Byron, Tash and Amy.