Does Laura win Marco’s Immunity Pin Challenge? We know from the promo that Laura has to face the guest chef tonight. The first challenge was an onion challenge. Laura, Ben and Tracy all had to finely dice an onion. Marco did the demonstration of the correct technique, he was meticulous and diced his onion without looking at it to avoid tears. Tracy cut herself twice and had to restart, Ben diced two but they weren’t fine enough. Laura was like the tortoise, she was slow and precise and in the end diced the onion fine enough for Marco. 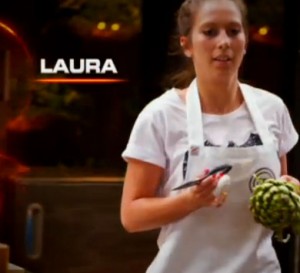 Laura was to face Donovan Cook, head chef of the Atlanta. The choice of main ingredient was between Surf (fish) and Turf (red meat), if she chose, she would have to cook the same time as Donovan, if she left Donovan to choose she would have a 15 minute head start. She wasn’t confident with red meat so chose the fish.

Laura was making a filet of snapper with a Caper, Anchovy and tomato Vinaigrette

Donovan made a seafood broth flavoured with prawns, crabs pippies, and safron.

Laura was struggling with the direction of her dish. She was going to make an onion ash and a carrot puree. After back and forth with Marco and Donovan she decided to stick to a purely sicilian dish and make an orange and fennel salad instead.

It looked like Donovan might have put his broth on after the timer went off and Marco said step away from your benches.

First up for tasting was Laura’s dish. Pan fried snapper with fennel and orange salad. The dish looked fabulous. The judges, apparently, couldn’t tell who made the dish. It was clever cooking and a skilled hand made the vinaigrette. The snapper was cooked perfectly in the thicker part, but towards the tail was getting a bit well done.

Donovan was next with his pan fried baramundi with seafood broth. He told the judges he was 5 seconds late with putting on the baramundi and the broth. The judges didn’t know what to do with the dish. Also, Donovan brought the dishes to the judges so it wasn’t blindly tasted.

Donovan’s dish wasn’t tasted because they couldn’t taste the sauce or the fish and the sauce was all over the rest of the elemnts.

The winner of Marco’s Masterchef Immunity Challenge was Laura.