Tonight’s Masterchef elimination will be the hardest dessert challenge yet. Christy Tania’s Mango Alfonso takes her two and a half hours to create and consists of 10 different components. Stephen, Scott and Jamie have just three hours to complete it. The loser will be eliminated from the competition. 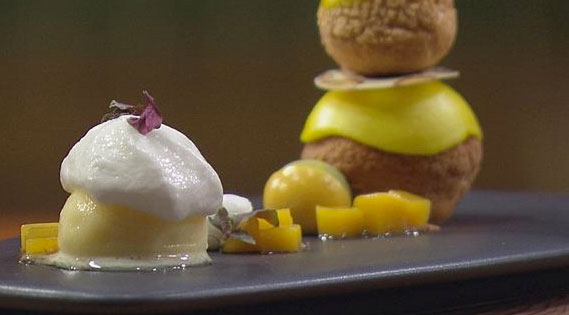 From the first step, Scott was off to a bad start. He forgot the lemon grass in the coconut lemon grass foam and had to redo it whilst the other two already had theirs in the fridge. He also strained his gelatine, but had no idea why! He makes multiple components several times and had to work extremely hard to catch up.

Stephen was methodical, clean and on target. Jamie said he practised choux pasty 7 times until he got it right, unfortunately the choux pastry he made tonight was flat and had to be done again. Stephen also had to redo his choux, This was the chance for Scott to catch up. The judges went over to scott and checked his choux mixture. He also had to do it again, it was too wet.

The second round of choux was OK for Stephen, but Jamie and Scott had to do it a third time but Scott ignored the advice and pushed on with other elements.

Jamie’s third batch of choux pastry was done right. He pushed on to his next ingredient. With 30 minutes to go Stephen had a slight lead, followed by Jamie and Scott. Jamie took a few shortcuts with his tempered chocolate, so hopefully he will at least get it on the plate. Scott was so far behind he was considering leaving off elements all together. Stephen was as cool as could be and was almost ready to plate up.

Jamie made an error in piping in the wrong ingredient into the profiteroles. Stephen was the first to plate up, his elements looked pretty good. Jamie was next followed by Scott. Scott’s plating up was very haphazard and missing a lot of elements.

Down the wire, Stephen’s looked the pretty good and Jamie’s was OK but just after the buzzer his tower fell over.

Stephen’s dish was the first to be tasted. Before they tasted the dish, Gary wanted to say he was pleased all the elements were on the plate, Christy was impressed. The stand outs were the sorbet and choux pastry. George thought he did a stand out job, it was “delicious”. Matt said it was a well balanced dish.

Scott’s dish was next. He said he’d “lost the plot” and had never “done that much reading” in his life. The judges looked a bit bewildered with his dish. George and Gary loved the sorbet but the choux buns were “woeful”.

Jamie’s dish was last. The judges said they would taste the part of the dish that fell off the plate given that it was on there after time was up. Jamie had all the components on the plate. Christy liked the choux but he put the wrong filling in one of the choux pastry. The judges weren’t sure how to judge this as some of the things weren’t correct.

Christy said the challenge was about choux pastry. Which is why Jamie was safe and Scott was eliminated tonight.