Tonight was day 2 of Heston Week and the contestants had to cook along at the same speed as Heston with one of his fat duck inspired recipes without a recipe. Brent won last night’s challenge so had a huge advantage, he was able to see the recipe and ask questions about the dish.

The dish was a beetroot risotto,but it wasn’t a standard risotto. It had some strange elements such as acid butter, wine jelly, horseradish ice cream and seaweed stock.

The winner would have the same advantage as Brent did this morning for tomorrow’s challenge and the loser will join Tracy in an elimination at the end of the week. 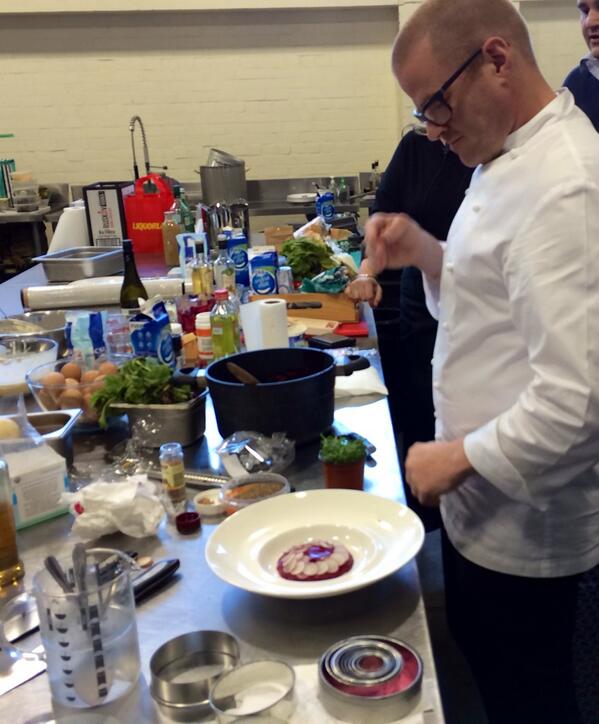 Laura was very flustered. From the get go she was a little behind. Emelia on the other hand was ahead, she knew they were making an anglaise so knew she needed eggs and a mixer. When Heston got on to the onions, he chopped them way faster than anyone else, which put them a bit behind.

Brent noticed he had his scales set wrong so all his measurements so far were wrong and he had to start them again. Throughout the next few elements he had to to cook two elements at once.

Amy poured the wrong ingredients into the wrong combination of pots on her counter. Heston came and helped her.

It was on the the gelatine. Brent remembered this step and was neck-a-neck with Heston.

They were on to the risotto. Ben browned his too far and had to re-do it. The contestants had to mix a lot of their previous ingredients in to the risotto as well as add “approximate” amounts of liquids and alcohols to it.

Heston was coming close to finishing. He was up to the ice cream. It was the white anglaise, liquid nitrogen, and the beetroot ripple. Ben added way too much nitrogen to his ice cream and it turned solid in the mixer. Some others, instead of making a ‘ripple’ of beetroot through the anglaise, turned theirs pink.

It was then up to the plating. Heston started, Brent was working along side with him. Ben and Laura were close.

At the end, pretty much everyone got everything on the plate.

The first dish to be judged was Jamie’s. His ice cream was bright pink but overall the dish looked similar to Heston’s. His dish was “great”, it had the right flavours and his radishes were sliced to the right thickness.

Next up was Ben. He was shaking when finishing his dish off the ice cream. Heston tasted his ice cream, unfortunately he had some crystalised fat in it.

Amy;s dish was good, Gary noted that it was the first one that tasted almost the same as Heston’s dish. There was too much chocolate sprinkled on the plate.

Emelia’s dish was good. Her radish was cut into different thicknesses but overall it was a good dish.

Laura was next. Her ice cream was a bright pink and was melting. The risotto had a good texture and tasted good.

Brent’s dish was last. His quenelle wasn’t very good, but it had a good flavour and still had a bit of ripple. His risotto was a bit acidic and it didn’t balance as well as other dishes.

The winner tonight was Amy, they have extra time with Heston tomorrow.

The loser tonight was Ben, they will join Tracy in elimination at the end of the week.