Tonight’s challenge was a pub challenge. It wasn’t a team challenge tonight, each contestant had to cook one main dish. There will be 120 guests who will order any dish from the menu. There were 5 different pub classic dishes for the contestants to choose: surf & turf, parma, pasta, roast of the day and fish of the day. 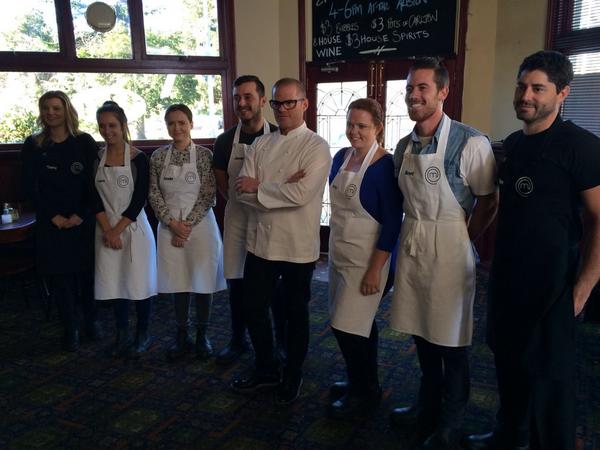 Because she won yesterday, Amy was able to choose the dish she wanted first and she chose the surf & turf. She was cooking a braised pork belly with scallops and Heston asked if guests would be expecting a traditional surf and turf.

Brent chose the parma. He was making it with beer in the tomato paste, prosciutto crumb and smoked cheddar.

Laura chose pasta. She was making it with a pappardelle mushroom ragu with crispy sage.

Emelia chose Roast of the day. She was cooking spatchcock, lentils, potatoes, kale and prosciutto

Fish of the day went to Jamie. He decided to cook a fish pie with whiting, prawn and scallops it was going to be a “conceptual pie”, not a real pie. Heston was very concerned with Jamie’s dish, in that, guests would be expecting an actual pie. It was also made to order, so it would be very hard to get the dishes out.

The contestants had 2 hours for prep. It was pretty chaotic in the small pub kitchen and the prep time went really quickly. Toward the end, with only 3 minutes to go, no contestants had finished a complete dish. Brent was close but he ran into Amy and dropped his entire salad on the floor. He had to make it again.

The guests started coming in to the restaurant and the first orders flew in. The contestants did well to get the dishes up at the same. Heston was head chef, he was running the service as a professional service.

Jamie was struggling to keep up with his fish cooked to order. The kitchen was reminded to work together to ensure every group of orders were sent out at the same time.

Matt Preston was happy Amy steered away from the classic surf and turf. The scallops and pork were both beautifully cooked.

Jamie was having a hard time with his fish. Heston was getting mad.

Brent’s chicken parmigiania with fennel salad was the next to go to the judges. The parma’s were all different sizes and the salad wasn’t delicate. It didn’t have the best flavour and it wasn’t the best parma or the best salad.

Laura was worried she will run out of pasta, so her portion size was a bit small.

Her dish went to the judges. Gary thought it was the “easiest dish out of the five” but it “wasn’t even an entree size”. There was some kick missing in her flavours, there was no “kick”, no “salt” and “no acidity”.

Emelia’s dishes were starting to get cold because she was waiting on other contestants constantly. Heston talked to the kitchen about their inconstant times they’ve been quoting.

Emelia’s roasted spatchcock went to the judges. It was golden, “roasty” and looked delicious. It was the “true essence of pub” It was warm, hearty and tasty.

Finally Jamie’s conceptual “pie” was next up. The dish didn’t look like a pie at all. The dish however was very delicious. Matt Preston appended the menu to say “not fish pie, but delicious”.

Amy won the best dish tonight and will have an advantage tomorrow night.

Brent is joining Ben and Tracy in elimination at the end of the week.