Tonight was the start of the Heston Blumenthal week on Masterchef 2014. The winner of today’s challenge will have a huge advantage this week. We’ve seen the power apron in one week, what will be this week’s advantage? The contestants had to for Heston in their own kitchen. They could only use what was in their pantry. The winner would win one-on-one time with him and another advantage later in the week. 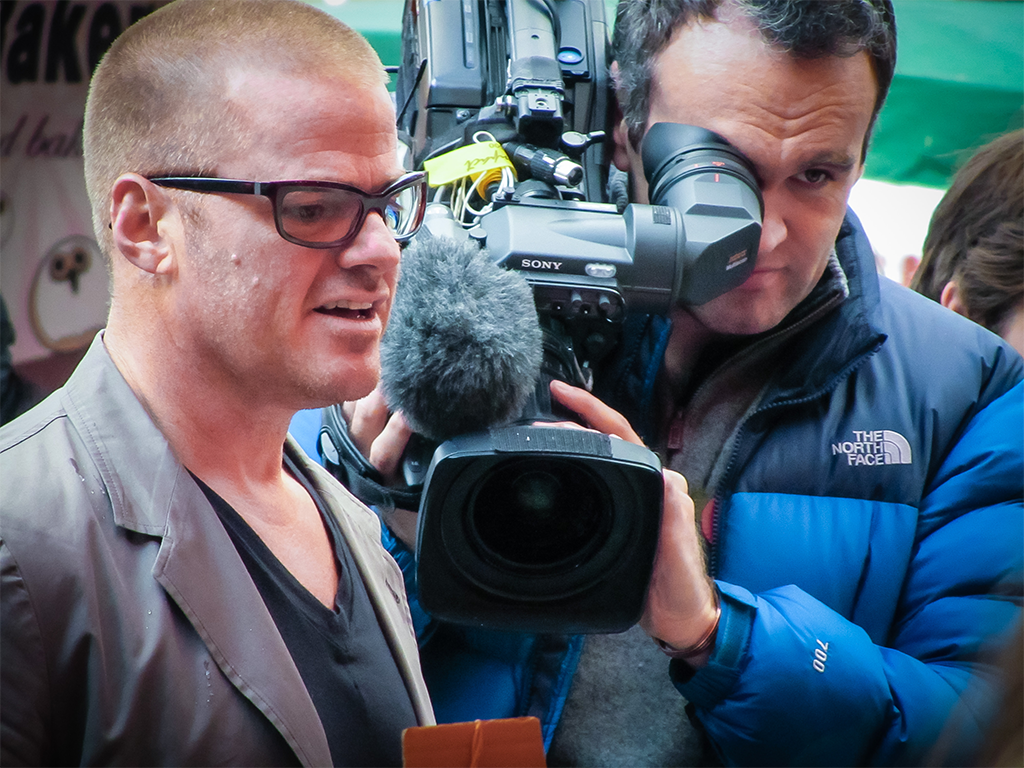 Brent was cooking duck and coffee, Ben was cooking a dessert with two types of apples, Laura, a fish soup. After 20 minutes, Tracy was still second guessing herself and changing her dish dish from salmon to a chicken and orange and saffron sauce. Amy cooked a sous vide beef fillet with potatoes and a jus. Jamie cooked a peppered chicken and Emelia cooked a beef carpaccio with egg.

It was Ben’s first dessert that went first in the judging, it was a composition of apples. He “nailed it”. The dish had the right textures and flavours and all the elements were done well.

Emelia’s carpaccio looked really good, the meat needed some seasoning but all the ingredients went well together.

Jamie’s pan-seared chicken with cauliflower and cous cous was “pretty as a picture”. It was a “good dish”, needed some more salt.

Tracy’s pan-seared chicken with fennel salad and orange dressing was next. She was a bit disappointed with her dish and was kicking herself that she didn’t go with her gut and cook a tuna. Heston said the same thing.

Brent’s pan-seared duck breast with coffee and juniper salad was next. He was hoping his duck was cooked, but it was a little bit under. There was a “potentially good dish” there, but needed more tuning.

Laura’s Sicilian fish stew with prawn head oil was next. George was “lost for words in a good way”. Heston loved the broth, it had “real depth” he was “very very impressed”.

Amy’s beef and potatoes were next. It was a lovely dish, and worked well. Heston said sometimes a fillet could be boring but hers was done well.

The three stand out dishes were Laura, Jamie and Ben but it was Ben who won today.

Ben got to ride in the car with Heston on the way to the Masterchef kitchen. He revealed that the next competition was an invention test using Australian ingredients.

In round 2, the worst dish will not be able to cook the rest of the week and will be in an elimination challenge. The best dishes will be able to spend some time with Heston.

The challenge was an Australian ingredients challenge. They had 90 minutes to cook and Heston was looking for three key things:

1. Want to see the native ingredients showcased
2. Has to be about cooking for a family
3. Has to be an inventive dish

Tracy decided to cook cured beef with potato and saltbush puree. Ben, a snapper poached in red wine and beef stock with vegemite and Laura, a stuffed squid and a native salad. Emelia cooked a quail with mushroom and squid consommé and native succulents. She was going to put the squid in raw to have some theatrics of it slightly cooking and moving in the bowl.

Brent was cooking a sunday roast with a lamb filet and raw pumpkin which he was searing with a blowtorch. Jamie was cooking oysters with bacon sauce.

Ben was having a bit of trouble filleting his snapper and cooked it in his consommé to make it look like meat, but it wasn’t working. He changed it to pan-fry the snapper and use the consommé as a sauce.

Jamie made “the best sauce he had ever made”. It was an oyster and bacon sauce, but as time was running out, he forgot to put it on the plate. He was devastated.

Laura’s stuffed squid with native herbs an lemon aspen salad was first to be judged. Heston said it was hard to judge because there was so much on the plate. There was a lot of ingredients on the plate.

Amy was next, her stuffed quail with davidson plums and sweet potato looked nice. The quail was dry and overcooked.

Tracy’s native herb cured beef with saltbush salt and samphire was cooked perfectly. It was a redeeming dish and it worked but it was too salty. There was too much saltbush in everything.

Next was Brent’s lamb fillet with native greens with carrots and raw pumpkin. It was a very delicate dish, the lamb was moist and the pumpkin was “yum”.

Jamie’s Pan-fried snapper with Australian native succulents sans bacon oyster sauce was a “great dish” but there was something that was needed to tie it together, probably the missing sauce.

Emelia’s crispy quail with raw squid and consomme was a “nice dish”, but it needed more flavour. Matt was happy with the raw squid but said some people might not be.

Ben’s salt & pepper snapper with red wine emulsion and saltbush was next. There were a lot of flavours there, but Matt loved it, there needed to be a little more sauce on the plate, but it was delicious.

Brent won the best dish tonight, he “smashed them”

The two worst dishes were Amy and Tracy but Tracy will be going into elimination at the end of the week.