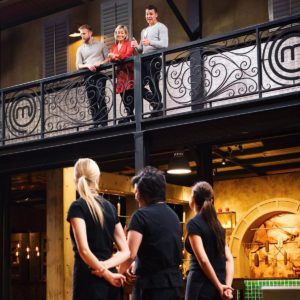 Tonight’s Masterchef Elimination is between Sarah, Diana and Karlie. Who will be eliminated from Masterchef tonight? It’s a pressure test set by Shaun Quade. The dish is Pearl-fection. It has many many steps, 8 pages in fact, and the contestants have 3 1/2 hours.

Right off the bat, Diana has forgotten a step. She hasn’t put her ash into the oven to smoke her fish. Both Sarah and Karlie have. These small details are enough to send someone home.

Karlie isn’t sure how the dish was presented and isn’t too sure how to cut the fish.

The contestants smash through the steps, until the Marmalade. Karlie burns hers and has to remake it.

Sarah’s foam doesn’t thicken, there are a few elements she hasn’t made 100% and she starts to panic. There is not much from Diana at this stage, she is just powering through the elements.

Sarah is struggling to drill a hole in her frozen pearl. She fires up the dremel but can’t get a hole drilled into it. She turns up the speed and it cracks, she has to make another one. She remakes the pearl and this time tries to be more delicate, the hole comes out perfect.

There is 10 minutes left. Diana is plating up and she has overcooked her marmalade, it’s rock hard like candy. She decides to leave the marmalade off the plate. Karlee and Sarah are also plating up too. Sarah has no foam to plate up, it hasn’t worked out for her. Time is up. Who will be eliminated tonight?

It’s time to taste the dishes. Karlee is up first. The judges are impressed with how her dish has been plated up. They taste the dish. Gary says all the elements are really good. Matt says the textual flavour is right on. Next up is Diana. She is worried as her dish is missing marmalade. She says it is the toughest cook she has had to do. The judges taste the dish. The miso flavour in the ice cream is really good, however the dish is missing the marmalade, which is a shame, the rest of the elements are good. Finally it’s Sarah’s turn. She’s corned as her dish has no foam. The judges say the dish looks good. They taste the dish. Matt says there are some good things on the plate. The judges aren’t giving anything away. Who will be eliminated?

It’s time to find out who is going home. Karlee is safe tonight. It is now between Diana and Sarah. Sarah has been eliminated from Masterchef tonight.