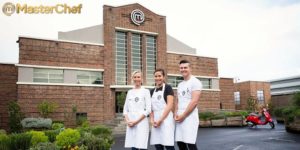 It is a service challenge. The contestants enter the room, the contestants are on the balcony and the tables are set. Each contestant must make a main and a dessert for 25 guests, they have 4 hours. They will be judged on their consistency, service and dishes. Shannon will be running the restaurant.

Ben makes his anglaise, but he spills it everywhere, could Ben be eliminated tonight? This puts him behind. Shannon is trying to give him a hint, his dishes are too complex, he says even he wouldn’t be able to do this in 4 hours. Diana is also making a complex main, it contains 9 elements.

Karlie’s prawn oil tastes bitter, according to Shannon. She doesn’t know what to do, and ditches the element. Karlee is looking and feeling flustered. Will she get her dishes ready on time? In contrast Diana is cool calm and collected in the kitchen today. Ben is also running around all over the place, he hasn’t started his dutch biscuits and he has a few other elements that he hasn’t even started yet. Shannon questions whether he will be ready on time, he reminds him that his beef hasn’t been cooked yet. Ben is looking like he’s giving up but pulls out a photo of his kids, he finds his focus and motivation again and gets moving.

Shannon calls out and tells the cooks to stop. They stop what they are doing and look towards the doors, all of the guests start arriving through the double doors. The pressure increases in the kitchen. Shannon tells them to prepare themselves, the first order will be coming through in one minute. It’s time for the contestants to start plating up their dishes for service. The first dishes go out. Karlee is still running behind, her crayfish is not cooked.

The first dish the judges taste is Diana’s mushroom and wagyu beef dish. The judges think the dish looks amazing and tastes amazing. The love the way the beef is cooked. The next dish going out to the judges is Ben’s beef and tulip bulb dish. The dehydrated onion skins are torched on the plate by the waiters and the judges enjoy the theatre of the dish. Gary, George and Matt all comment they’ve never eaten tulip bulbs before. George loves the dish, he says the tulip bulbs are sensational. Gary says it’s very clever and very tasty.

Karlee is still really behind. Shannon keeps telling her to come on, he is almost at the point of yelling at her for her first four dishes. Karlee is getting all emotional and walks off in tears, Diana gives her a big hug. Diana tells her not to worry as it comes down to flavour in the long run. Karlee decides she will keep going and gets her first four dishes out for service.

The judges receive their dish from Karlee, she has made crayfish with ginger broth. They are all impressed with the presentation of her dish. They taste it, George says he loves it, he loves the broth. He says the crayfish is cooked perfectly, he says the dish is worth the wait. Gary says the crayfish has been cooked so well and it’s really tender. Matt says Diana’s dish amazing, Karlee’s dish amazing but Ben’s was only very very good. It all comes down to dessert. Who will be eliminated?

The contestants get on to their desserts. Ben says he still has a lot of work to do to prepare his dessert. Karlee tastes her mandarin syrup and she notices something is not right. Diana is already plating up her first dessert dish and sends it out to service.

The judges receive Diana’s lemon verbena, whey caramel and grains dessert. The judges say it looks really really pretty. George says he’s never had this combination of flavours before but it’s yum. Matt says it’s delicious. He thinks she will definitely be in the finale based on this dish, Gary agrees.

Ben is having a lot of trouble plating up his pumpkin galettes, he cannot get them off the trays and is starting to stress out again. The pumpkin had just turned to mush. Karlee finally gets her desserts out.

Finally Ben’s dish goes out to the judges. They say the dish looks absolutely lovely. Its a pumpkin galette with marscapone mousse and dutch spices. Gary says he loves it and he says it is delicious. George says it’s like the best pumpkin pie, it’s yum.

Service is up! It’s time to find out who will be eliminated.

The first person through to the grand finale tomorrow night is Diana. Now it’s between Karlee and Ben. Who will be eliminated? Matt says her main course was ambitious but delicious. The dessert had everything you want in a great modern dessert. Diana says she is speechless. Matt says she was a rockstar in the kitchen today.

So who will it be, Karlee or Ben? Gary says that as Karlee’s mandarin sauce was too bitter, she is going home tonight. Karlee has been eliminated from Masterchef tonight.

Who will win in the grand finale tomorrow night, will it be Ben or Diana?