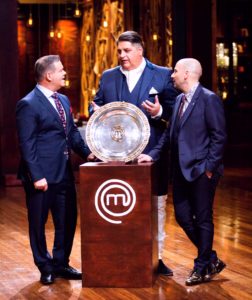 Who won masterchef 2016? Tonight we find out the Masterchef Winner, will it be Matt or Elena that take home the grand final win?

Spoiler: The Masterchef Winner will be announced here first in our live blog.

It is the grand finale of Masterchef 2016 and the two contestants left, Matt and Elena are well deserving of being in the final. One of them will have their name etched on the trophy and be awarded $250,000. There are no Masterchef winner spoilers tonight, we will bring you the winner as it is announced on channel 10 tonight.

The challenge tonight is three rounds, an entree, a main and a dessert. It is the most important cook of the competition and probably the contestant’s lives.

Matt chooses the quail. He knows he has to take his cook to a whole new level. He is making roasted quail with charred corn. The quail needs to be delicate, he decideds to french the legs. Elena chooses the marron. She is making it two ways, with a dashi based ponzu salad with one marron tail on each plate and a marron cracker. She removes the flesh from the tails and mixes it with tapioca and flour and spreads it on a board and paper and its into the oven to dehydrate.

Elena smokes her vegetables for the salad. She is flying along, she tweaks her dashi reduction by adding the marron shells to give it more flavour.

Matt is also making a reduction for the quail, it has depth and flavour, he adds some butter and moves on. 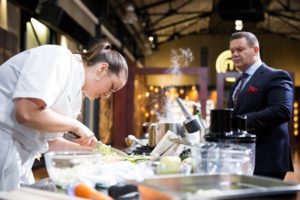 There is only 15 minutes to go, first course has flown by. we’re not even half an hour into the show and first course is almost done. We will be finding out the masterchef winner for 2016 soon! 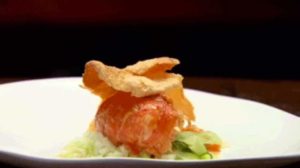 Gary tastes Elena’s reduction and tells her it does nothing. She is surprised but lucky she has had the feedback. She is starting to think she has taken on too much for an hour cook.

It’s plating up time. Both Matt and Elena are hurrying to get to the end of the cook. Elena is starting to dress the plate, she puts the smoked vegetables on the bottom and the marron on top. Matt starts with a puree as a base, layes the charred corn on top, then the quail and a salsa. There is something missing, he adds micro herbs. Both teams get their dishes together, it’s judging time!

First up tonight is Elena’s Marron two ways with a smoked vegetable salad and a dashi dressing. Gary said he was worried about the dish because there needs to be more depth of flavour in the dashi, but he marron is perfectly cooked.

George says it’s delicious, she has added another dish to her repertoire, it is perfectly cooked. Matt says she hasn’t disappointed them, it is great.

Next is Matt’s Confit quail with corn & chorizo sals and Pedro Ximénez glaze. Both George and Gary love it. Gary says the glaze is absolutely delicious. Matt says the cooking of the quail is beautiful. It looks like Matt might win this round. 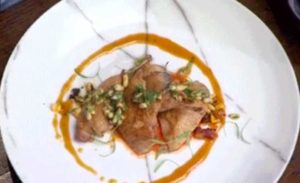 There are 30 points up for grabs in the first round, here are the scores:

This puts Matt in the lead by 3 points.

There are no rules in round 2. They can cook whatever they like for a main course. Elena is making twice cooked lamb with a jus, beets and some pickled vegetables. Crispy skin barramundi fillet, brussels sprouts and a pancetta and prawn head broth. They are out of the gates. Elena gets her lamb into the pressure cooker and matt gets his barramundi into the oven.

Who will be the Masterchef Winner for 2016? Two dishes to go!

Gary comes over to matt and questions his flavour combination, does prawn heads go with pancetta? He decides to stick with his gut and go with the flavour combination. He boils his brussel sprouts, cuts them in half and then fries them. He is also making fondant potatoes, he uses the broth from the prawn heads to flavour them. Meanwhile elena is pickling her beets with raspberry and making a puree with macadamias.

Matt is wondering how he can make the broth next level. The flavour has to be big and bold, he adds saffron. There is 15 minutes to go. He tests his barramundi to see how long it will take to sear. Elena’s lamb is nearing completion in the pressure cooker, she still needs to baste it once it comes out.

Matt’s test barramundi is undercooked, he knows it will take longer than 7 minutes, with 10 minutes to go he puts the rest of them in. He cannot get this wrong, it could send him home and crown Elena the winner. The race to the finish and plate up. Who will win this round? 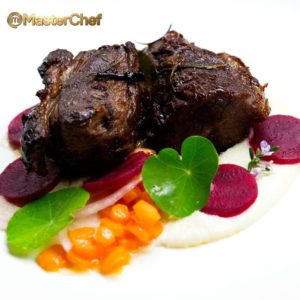 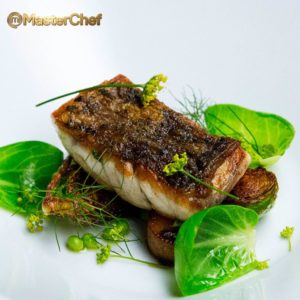 The first dish to be tasted is Elena’s twice cooked lamb with lamb jus, pickled beets and vegetables. It is a pretty dish. George says he is running out of words for things that blow his mind. It is a clever dish, the raspberry vinegar is a very smart move and the sauce is amazing. Matt says it’s an absolutely smashing plate of food.

Next is Matt’s crispy skin barramundi. Gary asks how he feels about the dish, Matt says “pretty proud”, he can’t believe how far he has come, there are a couple of tears shed. Gary says, “well, this dish looks amazing, it is drop dead gorgeous”. The judges thank him. Gary says he was worried about the flavour combination, he says he has been proved wrong, it has bags of flavour. George says its the total package, a clever dish. Matt says the really great dishes make perfect sense, and this tastes like a dish that has been on a great french menu for 50 years. Gary says he couldn’t have cooked the fish better.

There are 30 points up for grabs again.

Elena gets a perfect score of 30 for her dish too, she is on 53 points.

Matt is still 3 points in the lead, who will be the Masterchef winner?

It is on to round 3. Gary introduces the people who have supported the two contestants, their family. There are introductions all around then it is down to business. The third round challenge is prepared by two chefs, number 7 chef in the world Ashley Palmer-Watts and Heston Blumanthal. The dish they have come up with has 100 steps and is called “Ver jus in egg”. Inspired by a recipe in 1726 which was an ver jus with egg. It looks just like an egg but the whites are pana cotta, the yolk is a gel and the shell is two layers of chocolate. It looks ridiculously hard. 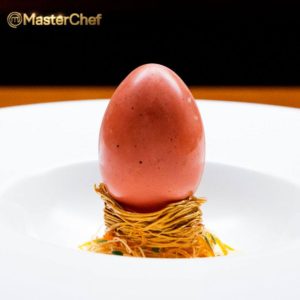 Matt and Elena have 5 1/2 hours to cook this dish and there are 40 points up for grabs.

The first element is the coffee parfait which sits inside the egg at the bottom, both Elena and Matt get started. After the coffee parfait it’s onto the gel. Matt’s looks good but Elena has added the gel too early, it isn’t going to set correctly, she’s used too much of the ingredients to start again. She is three points down and she has made a mistake in the first few steps. She picks herself up and decides to do a half batch with the left over ingredients. She can’t get it wrong a second time. Matt’s gel is set and needs to blitz it, it’s looking good.

The next element is a coconut pana cotta. It is yoghurt, coconut milk and coconut cream combined. Elena has caught up. Both the contestants make the pana cotta but Matt’s doesn’t look anywhere near as thick as Elena’s.

It is on to the nest, the contestants have to make honey comb and pull it into threads under a heat lamp. Both contestants get this done.

Matt goes to check on his pana cotta, it’s not set. He’s stuffed something up and has to do it again. There is only an hour and a half to go, he is in trouble. George gives him a pep talk and he decides he is not going to give up. He makes the pana cotta again. Elena is steam rolling ahead, she is on to the egg shell. It requires two tempered chocolates… on marble. Once the chocolate is tempered it needs to be sprayed onto the mould with a paint gun. Matt catches up to the tempering but he lets it cool too quickly, he hopes it doesn’t affect the shell. Elena realises she didn’t let the excess chocolate drip out of her mould but she can’t start it again.

It is coming down to the wire.

The final steps are to construct the egg. The pana cotta goes into the shell and it needs to be sealed. Matt is behind but Elena comes over and helps him to seal it. Time’s up.

Matt says “oh no”. He looks at his dish and his egg is split. It has opened up like an oyster. He has forgotten to seal it with extra chocolate at the end. Is this game over? Has Elena won masterchef 2016?

It is judging time. The first dish to be judged is Matt’s. Obviously his egg didn’t stay together, but the judges tell him even the best cooks would struggle with this dish. Heston says it is a great dish, to eat as a whole. George says the pana cotta is good, the texture is that of egg white. Matt says it is all about presentation in this dish but the split was a bit of a problem. Gary said the egg shell wasn’t perfectly tempered, it is going to difficult to score.

Next is Elena’s egg. It looks good, her egg has stayed together. It cracks correctly, the chocolate was tempered better but the chocolate is thicker. Heston says there’s not much from looking at it that he can fault. He says it is delicious. George says because it was a whole egg it delivered on the theatre. Her egg is much better. Who is the Masterchef Winner?

Elena is the winner of Masterchef 2016