Who was eliminated from Masterchef tonight? Sarah, Byron, Steven or Ben?

Spoiler: We will be announcing who is eliminated tonight.

Joe and Grbac and Scott Picket from St Crispin on Smith Street in Collingwood, Victoria were the guests on tonight’s pressure test. Scott brought a main dish of Venison, Fig and Beetroot and Joe brought a dessert with rice pudding, parsnip and jerusalem artichoke panna cotta. 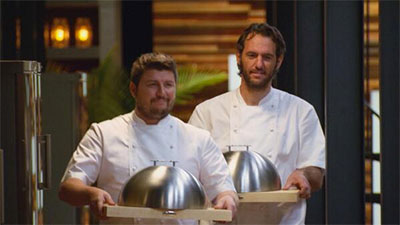 Byron was off to a slow start, he wasn’t sure how to cut the venison and Sarah struggled with the butchering component. Steven seemed to be calm and calculated in preparing his dessert. Ben was going great from the get go.

Ben was first on to the stock, Sarah was flustered and spilling vegetables on the floor and Byron was well behind at this point.

Steven by far had the most components to cook, he was using almost every burner across 2 stoves. With 15 minutes to go he still had to cook his rice pudding and Byron had to cook his crépinette.

With 10 minutes to go, Sarah almost broke down when making her crépinette and Steven’s rice pudding wasn’t reducing. Ben had burnt a couple of his crépinettes.

Towards the end, Byron and Sarah both left off their figs and Byron just threw the grapes on uncooked and with stems. Steven missed out on his ice cream and Sarah and Ben got all their elements on the plate.

First to be judged was Sarah. She was a bit scattered tonight and wasn’t confident that it was her best dish. Her figs were missing, but the crépinette was delicious. The venison was undercooked and there was cling film left in the dish.

Second to be judged was Ben. The plating wasn’t 100% but good for a first attempt. The venison was just a little undercooked and the crépinette was a bit burnt on the bottom. The butchering was done very well and the frenching was great. His dish had good flavours.

Byron’s dish was also missing figs, his grapes had the vine still attached and they found some string in his dish. His kale chip was crunchy and his kale puree was a stand out. The crépinette was a bit of a let down but his venison was cooked the best out of all of them.

Stephen’s dessert was the last to be tasted. He had to put the cream foam on his plate at the judging table and managed to spray the judges with cream. His ice cream didn’t turn out and the judges thought he struggled getting his dish together. Gary liked the texture of the marshmallows, the raisins and the parsnip. There were issues with the ice cream and foam and the panna cotta was lumpy.

All the contestants made mistakes tonight. Ben and Sarah were first to be safe. Byron was safe on his perfectly cooked venison. Steven was eliminated from masterchef tonight.