Tonight was the first immunity challenge of Masterchef this year. The winner receives the immunity pin, to use at any of the elimination challenges down the track. The mini mystery box was filled with tiny things, quail, quail eggs, beetroot, mini leek. They couldn’t use anything from the garden and only had a few staples. The contestants had 20 minutes to cook an Amuse-bouche. The utensils were mini, the pots and pans were mini, everything was mini in this challenge.

The winner would face off against a professional cook in the next challenge.

Laura cooked pan grilled quail with white bait crumble and hard boiled quail eggs. Unfortunately Garry got a bone in his, it was a pretty dangerous wish-bone. Matt Preston’s issue was it wasn’t easy to eat, having to assemble the dish. George liked the white bait crumble.

Amy cooked pan roasted quail with crispy beetroot chips. The sauce at the bottom was very sticky, having gone a bit like toffee. It had nice pepper and nice sweetness. Matt Preston judges the dish as how his mouth is awash with flavour afterwards, he was very pleased with the dish.

Tracy cooked quail sausage with quail egg cream and a slice of candied beetroot. She noticed a piece of string just. Gary said it was “bloody delicious”. George loved it, it showed technique, well done.

The contestant who got through to the next round was Tracey

Tracey had to cook off against Oliver Gould from the Stokehouse in Melbourne. He was able to choose either fruit or nuts to use in the dish. Oliver chose fruit. Tracey had Kylie Kwong as her mentor and 1 hour and 15 minutes to cook. Oliver Grould was given 1 hour.

Tracy originally wanted to cook a Gazpacho, but Kylie Kwong talked her into cooking something that was more about “fruit”. She chose to cook lemon and lime curd tart with candied orange peel and italian meringue. The meringue was over-whipped and the curd was runny. The pastry was one of the best they’d had so far in the competition.

Oliver cooked Seared pork loin with fruits  and summer fruits with pickled beetroot and prosciutto. The pork was “really fatty” and the fat wasn’t rendered down. It was a really clever dish but there might have been one too many fruits. The buckwheat didn’t really go with the dish, however the pork was cooked well. 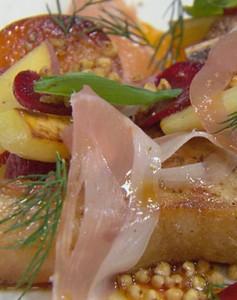 The winner tonight was Oliver Gould. Tracey didn’t get an immunity pin tonight