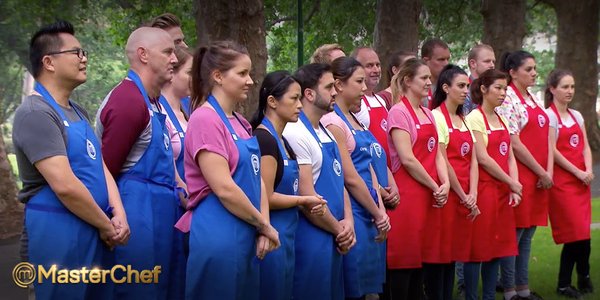 It’s team challenge night on MasterChef. The teams are split into two and they have to cook meals for 30 guests of Huxtable and Pei Modern in Melbourne. The captain and vice captains of the teams will go to the restaurants and have to learn what they are going to cook without a pen and paper. They then have to relay this to their other team members. They need to have a good memory and be able to replicate the dishes. The losing team will go into elimination tomorrow night.

The blue team are making

The red team are making

Both teams madly rush to describe the dishes to their teams. They have 15 minutes to convey the recipe before they have 30 minutes to create it and bring it out to the chefs and judges. Who will win the team challenge on Masterchef tonight? Both teams work very hard to get the dishes together.

The red team is first to take their dish out. They show the team’s dish vs the original. It doesn’t have enough smoke, but it looks similar. The cream was delicious but the beetroots are a bit burnt. Gary said its pretty good.

Next up the blue team presents their dish to the judges. Straight away the can see when comparing the two dishes that the zucchini flowers are not as charred. Gary loves the green sauce and they all agree that the dish is seasoned well.

Now it’s time for main course. The blue team is having trouble with their radicchio puree. The red team is smoking up the kitchen cooking their wagyu steaks over coals.

The red team brings their main up to the judges. They compare the two dishes, it looks very similar. The judges taste the dish. Gary says he thought they were going to over cook the steak but he says the steak is absolutely smashing. The guest chef says it will pass for a dish at his restaurant.

The blue team is still having trouble with their radicchio puree. They’re not sure if they should serve it but they finally decide to do it.

It’s dessert time. Cecilia from the red team is trying to get her chocolate mousse spheres gently out of the moulds, they look great. Karmen is concerned that her caramel is too hot, she tries to pour some on top of the custard but it melts the custard underneath.

The red team brings it’s dessert to the judges. The dish is almost identical to the original dish by the chef. The judges taste the dish. The chef is happy with all the textures and the flavours. George cannot believe how similar it is. All the judges enjoy the dish.

The blue team decides to leave the caramel off their dessert as it was still too hot. The judges instantly notice that the caramel sauce is missing. They like the crisp crostoli and the custard flavour. They are disappointed that the caramel was missed.