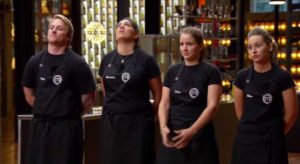 Tonight’s Masterchef Elimination is between Trent, Nicolette, Chloe and Elise, who will be eliminated tonight? What do we know? It is going to be the hardest decision the masterchef judges will have to make. It is Chloe’s fifth time in elimination. Tonight will be two rounds. First, the four contestants will be split into two teams and cook off against each other. The losers will then go into round two one contestant will be eliminated tonight.

Chloe has chosen a chicken dish, she is making a roast chicken breast on the crown. Trent is making beef eye fillet with crispy kale, salsa verde and red wine butter sauce. Elise is making strawberry parfait and champagne jelly. Nicolette is making poached meringue with lemon and strawberries.

The judges are worries that some of the dishes confuse the brief, it’s not an easy one.

Elise tries to temper some chocolate but its not working.

Time is getting close.

Trent starts plating up while his beef is resting. He’s not sure how he will incorporate his smoke. He decides to put it under a cloche. Chloe takes her chicken out of the oven, its perfect. She gets a sauce on and tries to reduce it to a really thick sauce. Elise get her parfait out of the blast chiller, its set, she starts plating up. It’s Masterchef elimination, who will be eliminated form Masterchef tonight?

The contestants furiously plate up.

The first dish to be tasted is Elise’s strawberry parfait with champagne jelly, coconut crumb and tempered chocolate. George says they are happy with it, its delicious. Matt says its so good, tasty and crunchy. Gary says its “yummy to its absolute core”.

Next is Nicolette’s poached meringue with strawberries and lemon. Gary says the flavour is delicious. Matt says the meringue is so light and delicious, but the lemon is a bit overpowering.

Finally it’s Trent’s seared beef fillet with smoked beurre rouge sauce. He makes the judges turn around as he fills the cloche with smoke. George says “its so beyond your years”. Matt says he’s been to a lot of restaurants this year and this dish is one of the best.

George says they’ve got a serious issue on their hands, both the autumn dishes were amazing.

Elise is safe, Nicolette is into round two.

Trent is safe, Chloe is into round two.

It’s Nicolette vs Chloe, who will survive the Masterchef elimination?

Round two’s inspiration is fire. It is an open pantry and the contestants have 60 minutes. Chloe is making a toasted cinnamon cake with figs and a maple meringue. She decides to smoke the cinnamon sticks before cooking. Nicolette is making smoked chocolate mousse with vanilla beans and marshmallows.

It’s plating up time. Both Nicolette and Chloe battle to get their dishes finished. Time is up.

The first dish to be judged is Nicolette’s grilled peaches with marshmallow and smoked white chocolate mousse. The judges mention that for a 19 year old she has put up two amazing looking dishes today. Gary said she has handled the peaches perfectly and the macadamia is a good accompaniment. Matt says its a really amazing achievement the flavours are great.

Chloe’s dish needs to be flambéed in front of the judges, its risky. She cooked a cinnamon butter cake with maple meringue and roasted figs. She starts the falmbé, it works. The meringue goes nice and toasty. The judges are impressed, it meets the brief. Matt says “Oh my goodness”, it is a beautiful combination, the maple syrup marries up perfectly. George says all he needs is a cup of coffee.

It is time for the verdict? Who will be eliminated from Masterchef tonight?

Nicolette has been eliminated from Masterchef tonight.