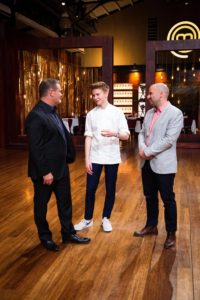 Tonight’s Masterchef elimination is a cook off between Theresa, Heather, Chloe and Anastasia. The challenge is set by 17 year old chef Flynn McGarry. Who will be eliminated from masterchef tonight?

It is Anastasia’s first pressure test in the competition.

New York chef, Flynn McGarry is only 17 years old. He started cooking in restaurants at age 11 and is on the list of most influential teens. He walks in with a cloche, his dish tonight is beet wellington.

The contestants have 2 1/2 hours to cook the 62 step dish. Theresa starts by annotating the recipe, but doesn’t read the whole thing. Anastasia keeps a level head, although its her first pressure test, she knows she has to follow the recipe precisely. Heather only reads the recipe step by step.

Theresa juices her beetroot and puts it in the pressure cooker. Anastasia is falling behind, she is still peeling her beetroot while all the others have finished it. She keeps reading the recipe instead of trusting her instincts. Heather gets started on her puff pastry. Theresa is also on her puff pastry but she is unsure about the size of the chunks of butter. Anastasia is working really hard to catch up to the others and she is also up to her puff pastry. Theresa charrs her beetroot and onion and puts them into a pot with boiling water to make her sauce. Chloe is rushing and has spilt her sauce mix on the bench and she does it twice. Gary tells her to measure out the sauce to see if she has enough and she is 50ml short. She is not sure what to do. She decides to run the beetroot under water and try and squeeze out a little more to make the 500ml. The other girls have gotten their beet wellington’s in the oven but Anastasia has not gotten hers in yet. She is losing it and breaks down. George comes along and gives her a pep talk and she decides to use her intuition more than the recipe.

Heather has gotten started on her date roulade. There is only 15 minutes left. Chloe is not sure of the cut required to cut the beet leaves so she cooks them in the cream whole but then later chops them up. There’s 5 minutes left now. Theresa cuts into her beet wellington and she is happy with how it is cooked. The girls start plating up. Time is up! All of them were able to complete the dish. Anastasia knows her plating is not quite right but she hopes the flavours will keep her in the competition.

It’s time to find out who will be eliminated from masterchef. The judges say Theresa and Heather both did a brilliant job. So it’s now between Chloe and Anastasia.

Anastasia has been eliminated from Masterchef tonight.