Tonight was the first Masterchef Team Challenge in a real restaurant. The losers will go to elimination tomorrow night.

The contestants had 2 1/2 hour prep and a 90 minute service for 50 people. The best contestant will get the power apron.

Billie had the power apron tonight and had the advantage. She was able to choose her team and her restaurant. She chose Saigon Sally, a vietnamese restaurant. She was the captain of the Red Team. The blue team chose Tokyo Tina. Here are the teams. 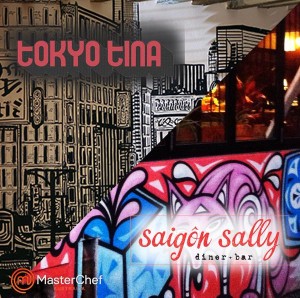 The judges were concerned that there were only 2 choices for main and dessert. They decided to add a Chargrilled prawns with mint salad and mandarin dressing dish.

John was captain and the team was Georgia, Matthew Rose, Sara and Stephen. John wanted to make 6 dishes, there were only 6 team members on the team, it was a big ask. They were making:

The blue team were freaking out, the team thought that there was no way they would make 6 different dishes.

The blue team were in a world of pain. Service was about to start and they were nowhere near ready. The first orders came in, they didn’t even have stations set up. Somehow as they were working through it, they managed to pull themselves together and were getting dishes out.

The judges started with Tuna tartare with honey wasabi emulsion. Gary said it was yum, a great slab of tuna. Matt liked the emulsion, it worked well. The Seared scallops, watercress and horseradish mayonnaise was Georgia’s dish and it was “yum”, the flavour of the sesame made the dish and the scallops were cooked perfectly.

The red team were getting into a “flow”. They were getting their dishes out very well. The first dish to be judged was Vietnamese coleslaw with coconut poached chicken. Matt was happy, he said “Oh Yeah”. George loved it, the chicken was not dry, it wasn’t overcooked. Next was Glazed pork belly with herb salad and chilli mayo. It was crispy. Matt “love it, love it, love it”. Gary loved the crunchy pork. George said it was fresh but “a bit naughty”. The Chargrilled prawns with mint salad and mandarin dressing was missing something that will balance out the dish. It had good presentation and the prawns were cooked well but it was just missing something.

It was on to desserts.

Reynold took out his honeycomb, but it was burnt. He had to start it again. The second lot was also burnt.

The first dish to be judged was the lime ice cream sundae. It was really delicious, but it didn’t have honeycomb on it. The coconut tapiuco with coconut crumble was great. Gary loved the “two gooey things together”. It was perfect for the theme of the night, but disappointing that it had the same crumble.

The blue team were in trouble. John had to blend white chocolate with the mousse, but there was no white chocolate in the pantry. They decided to leave it out. They were falling behind.

The Choux puff with green tea mousse was first to be judged. Matt asked “Where’s the flavour?”. The dish was lacking The Japanese nashi pear with apple crumble was also lacking flavour and complexity.

The judges loved the blue team’s chicken and tuna, and loved the red team’s slaw and pork and their desserts.

Because of this, the red team won tonight and the blue team will be going to elimination tomorrow night.