Tonight was a Masterchef Team Challenge. The winning team will be straight through to the finals and the losing team will join Matthew and Reynold in elimination tomorrow. They are at one of Jacques Reymond’s restaurant. They had to plan the menu and order the food. They had a budget, $1000 for tonight’s challenge. The contestants had 3 hours to plan, prepare and cook for service. 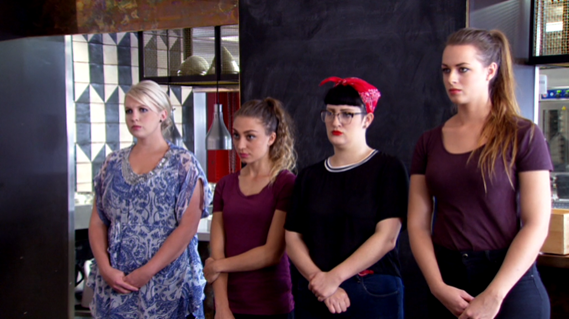 Georgia was on the blue team and had an advantage, it was to choose her team tonight. She chose Billie. That means Sara and Jessica are on the other team.

Blue team decided to cook beef for one main, and seafood for the second main. The first dish was eye fillet with puree and speck and the second dish was prawn mussel and corn bisque.

The red team was making lamb with chocolate and blackberry sauce with a parish mash. Jessica wasn’t convinced with this dish, Gary wasn’t either. Their second dish was a salmon with a butter emulsion.

The teams got their ingredients delivered, the blue team ordered speck, but it was only two small pieces. They think they still might be able to do it.

The red team unpacked their lamb. It was not the cut they were thinking. They were in trouble. They didn’t know what to do with this cut of lamb. Marco came over, he said this is what you ordered, although they meant backstrap. They had to use it.

For dessert, the blue team was cooking white chocolate mousse with figs and pomegranate syrup. Georgia was in charge of measuring out the ingredients. She has made this recipe before, but not for this many people. She was flustered.

Marco was monitoring the kitchen. He was over at the red team’s station, he wasn’t sure about their red wine and chocolate jus. Meanwhile, Billie was moving onto the cauliflower puree.

Red team was cooking a burnt butter and sage compot for dessert. Jessica was moving on to this.

Georgia was moving on to the bisque and cooking the mussels. She had over 300 of them to cook. There were 15 minutes to go before service started.

Both teams are panicking that they won’t be ready on time for service. Service starts in 5 minutes. The blue team is still making the crumb for their bisque. Finally the teams have their food ready for service. Marco reminds them that if they win this challenge that they are in the finals.

Service begins. Marco starts calling out orders for entrees. He calling out and asking how long it will take to get the orders up. The blue team is sending out the bisques. The judges receive their dish and are impressed with how it looks. It’s a prawn and mussels sweet corn bisque with a crumb. Gary and Matt say oh yum! Gary says there’s a lot of good cooking in there. George says it is incredibly delicious.

The salmon dishes are also coming out of the kitchen for the red team, although they are not going out as quickly as Marco would like them. Jessica is losing it, she cannot remember the number of dishes and what Marco is telling her. Marco has been sending out the bisques without the salmon dishes as he does not want the other dishes to go cold.

The judges receive their dish from the red team. It is Atlantic salmon with pippies and a miso emulsion. They taste the dish and the salmon is cooked well. George loves the flavour of sauce and the vegetables. Gary says it identifies as French. Matt is enjoying the crispy salmon skin.

The red team begins cooking their lamb for the main dishes. Sara is having trouble cooking her lamb. She has marinated it in balsamic and it has burnt when.

The judges receive their main dish from the red team. It’s a lamb fillet with chocolate with blackberry jus. Gary says it is wrong. George says there is something that is wrong with the flavour of the dish. Gary says the jus is just not right with the chocolate in it. The judges are quite disappointed.

The blue team are cooking their main dishes of beef. Billie is not happy with the side dish she has made of mushrooms, especially with the overall presentation.

The judges receive their main from the blue team. It is a eye fillet of beef with mushrooms. Gary says it looks like a banquet dish but not a good one. Then he tastes it and is surprised that it tastes lovely. He says it’s delicious and the beef is cooked really well.

The main courses are all done and now it’s time for the desserts.

Now the judges receive their dish from the blue team. It is a white chocolate mousse with figs and a pomegranate syrup. George says the combination of flavours are tasty and yummy, he loves it. He says it is a smart dessert. Matt says the fig could be roasted to make it softer.

Sara and Jessica are going into elimination with Matthew and Reynold.

Billie and Georgia are through to finals week.