Tonight’s Masterchef Team challenge was an American Style Barbecue Challenge. The contestants were divided into three teams of three. Only one team will be safe from elimination tomorrow.

The guest chef tonight was American “champion pitmaster” Andy Groneman. He explained what the judges were looking for. The contestants had 6 hours to serve 150 guest. They had to cook 3 different meat dishes, one had to be a “low and slow” pork rib dish and three vegetarian side dishes. They had to be creative. 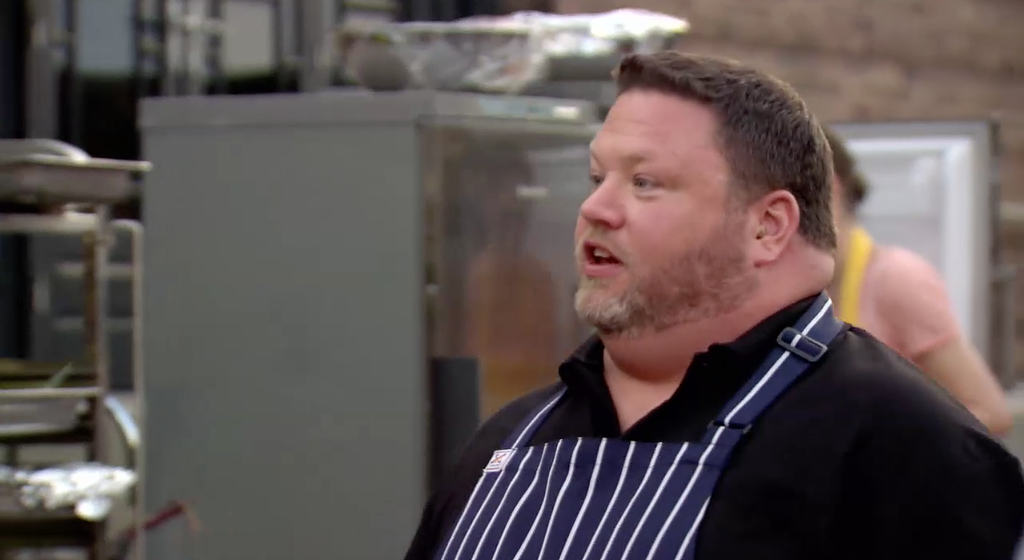 The red team were making chipotle chilli ribs and chicken wings. The blue team were making ribs, chicken leg and lamb cutlets. The ribs were a coffee, coriander and paprika back rub. This style of food was Jessica’s favourite. The yellow team were making a paprika, cinnamon, and clove pork ribs with a barbeque glaze. Matthew started working out the barbeque.

Georgia was working on the rub for the chicken wings, a huge gust of wind came along and blew paprika in her eyes. She had to wash them out.

The blue team had issues. They only had 3 cookers, but they needed two for the ribs. They were also cooking lamb and chicken, they had to share the last cooker for both of these dishes.

The yellow team decided to make a lemon and thyme herb rub on their lamb and finishing it with fresh lemon.

With three hours to go, the red team checked their meat, it wasn’t cooking. They had to turn up the bbq, but didn’t want to dry them out. They checked another barbeque, it was off. The contestants had to constantly feed their barbeque with wood chips, if they run out, it automatically turns off. It looks like it had been off for a long time. The red team was in trouble.

The blue team were making a barbeque sauce. They were were using burbon, wrapping each rack of ribs in foil and putting it back in the smoker.

There’s only one minute to go and none of the teams are ready. The yellow team seems to be the most organised at this stage. The red team is still struggling, none of their meat is ready. The blue team is in a panic trying to get ready for service.

The red team is still apologising to customers as they are still not ready. Gary comes along and gives them a pep talk and the girls are feeling a little more confident. In the meantime the blue team are serving customers. The yellow team’s ribs look great and they continue to serve customers.

The red team is slowly starting to get their food out to the customers.

It’s time for the judges to taste the blue team’s food. Matt says that they look brilliant. Gary and Matt both say “oh yeah”. The meat is falling off the bone. Next is their honey mustard glazed lamb, Gary likes the glaze. They taste the chicken next and Gary says that it is also delicious. The salads were enjoyed by the judges, they said they were refreshing.

The red team then has a problem when their barbecue starts to catch fire burning the chicken wings. Georgia and Jessie quickly try and remove the chicken from the fire.

The judges are ready to taste the red team’s food. They taste the chicken first and it is nicely cooked but has too much chilli and spice in it. The ribs are very salty and tough according to the judges. It’s time to taste the salads, Gary likes the blue cheese and corn. Matt loves the bourbon and sweet potato mash with pecans and maple.

Time is up and all of the customer have finally been served.

The team that is safe is the blue team as they had the best ribs.