Tonight’s Masterchef Challenge is a cook off at Georges Press Club restaurant. One contestant will be safe and the rest will go through to an elimination tomorrow. Each contestant must cook one of George’s dish and 35 VIPs and chefs will be eating at the restaurant. 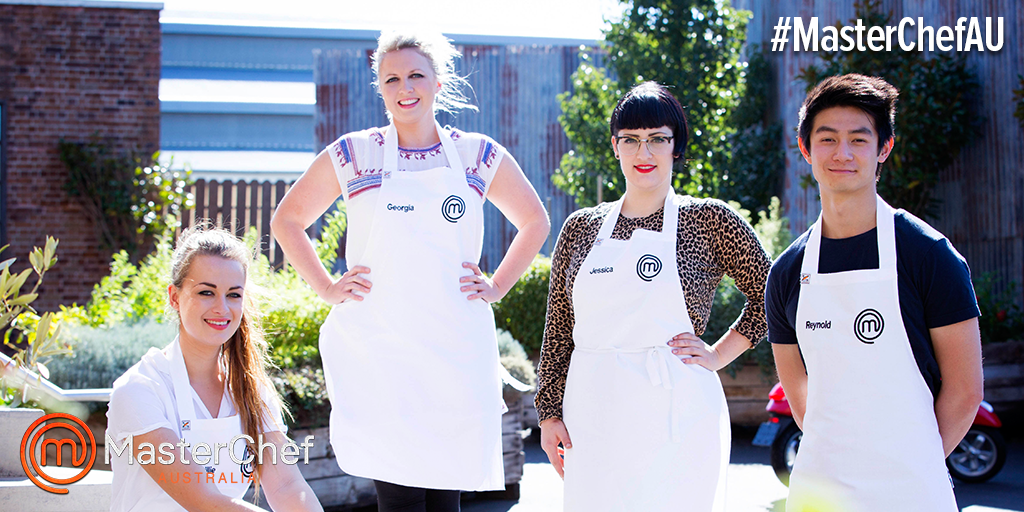 Jessica’s advantage from last night was that she was able to choose the dish she was cooking tonight. She chose the Whiting and lamb. The rest of the contestants pulled knives to see what order they will choose. Georgia was first, she chose the green greek salad and Billie chose the dessert which meant Reynold had to do the whiting.

The Masterchef contestants had 4 1/2 hours before service, who will be safe tonight?

The contestants were off. Billie was making her tuiles, she had to get them the perfect thickness so they would melt when heat was applied. She made 6 perfect ones, but when she was putting it in the oven the tray didn’t fit, she had to start again. Reynold was filleting his fish, it was taking him a long time. Fish is not his strength.

Georgia was making kale puree, it wasn’t right, George told her to try again. She managed to make it work by putting it in a blender, she didn’t need to make it again.

Reynold was falling behind, it was half way through the prep time and he was still gutting his fish.

Billie was loving her dish. It was the last one that had to go out, so she had the most time.

Jessica was doing well, she was getting through her elements one step at a time. She was piping out her cannelloni but she only had enough for 30 instead of 35. She had to make more.

Reynold is up to filleting his fish. He’s not really sure how to do it and is finding the fish quite slippery.

The customers begin to fill the restaurant and the contestants have 15 minutes to complete their preparation.

Georgia’s dish is first up. She plates her dishes up and George is very happy with how they look. Gary and Matt receive the Green Greek Salad that Georgia has prepared. Gary says he thinks she has done really well. Matt says it is tasty.

Reynold is still struggling to get his fish pin boned and trimmed. Billie offers to help him as she has prepared all of the elements for her dessert.

Service time has started for Reynold. He has finally prepared all of his dish and starts to cook the fish to order. One customer sends back his fish as it was raw. Reynold is worried he will be in the bottom three. George tells him to fix it and to cook another. His dish now arrives at the judges table. Gary says it doesn’t look as sharp and clean as George’s dish. Gary loves the black garlic and the yoghurt. Matt says there could have been a little bit of salt. Gary says there could have been more lamb fat.

Jessica’s dish is going to be served next. She is frantically trying to prepare her dish. Georgia offers to help. Jessica cannot get something out of the deep fryer and bursts out in tears. Georgia begins helping her to plate up. Suddenly Jessica drops two of her leek cannelloni’s  onto the floor. She is devastated as she did not prepare any spares. So she decides to cut the leeks in half and serve only a half portion. She went out to the customers and apologised to them. Her dish finally goes out for the judges to taste. Gary says the fondant potatoes looked delicious however they were undercooked. Matt says the lamb was delicious.

It’s time for the desserts to go out. Billie is now going to make her snow with the liquid nitrogen. Her dish goes out to the judges for tasting. Matt loves the textures of the dish and that the sponge is super light.

Service is over. The contestants and George all have a beer to celebrate their success.

It’s judgement time. The winner of the challenge goes straight through to the finals. Jessica and Reynold are going straight into the elimination tomorrow. The two dishes of the day belonged to Billie and Georgia.

Georgia is safe today and is going straight through to the semi finals.

27 thoughts on “Masterchef Press Club Challenge – Who is safe?”