Tonight’s Masterchef Immunity Challenge is the winner of the team challenge from Sunday night. Jacqui, Jessica and Matthew are up to win the immunity challenge tonight.

Round 1 was a “plating up” challenge. There were a stack of plates and a stack of ingredients. The contestants had to plate up George’s Moussaka from the press club, the best dish will go through to the next round. The contestants have not seen how the dish is plated up and must plate up a dish the judges can “eat with their eyes”, they had 4 minutes. Half way through, Jessica decided to scrap her plate and start again. Jessica wasn’t doing to well, she said she was used to plating up for kids, where the goal is just to get food on a plate fast. Jessica and Matthew’s dishes looked good, Jacqui accidentally left off a few ingredients. 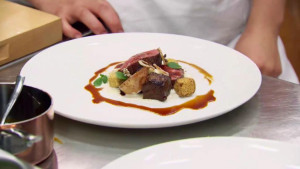 George plated up the dish to show the contestants how he would do it. It was very different to the other dishes, much more elegant. The judges liked Matthew’s plating up, it had good definition, but it was missing the onion rings. Gary also liked Jessica’s but some of the other judges thought the ingredients were too close together. George said because it was close, and Matthew was missing some elements, Jessica won round 1 and will cook for immunity.

Jessica will be cooking against Nick Hollaway from Nunu restaurant in Queensland.

The choices were “big” or “small”. The big ingredients were everything from giant rib eye and ostrich egg vs small ingredients such as petite cutlets and quail eggs.

Jessica decided to choose “small” as there were more ingredients on that bench that she was familiar with.

When the time started she chose quail, a few different small pumpkins, some baby carrots and some mandarins. She is making a roasted quail and a pumpkin puree, a wintery style dish. Jessica has decided to keep it simple.

It’s now time for Nick to start. Nick choses blueberries, grapes, plums, beetroot and radishes to go with his quail. He decides not to say what he is cooking just incase it doesn’t work out.

Jessica is deconstructing the quail. Shannon suggests she confits the quail legs. Jessica hasn’t used this cooking method before but she decides to give it a try.

Nick is going to poach the quail in a fruity liquid.

Jessica is working on a jus.

Jessica seasons her quail and cooks her baby carrots in mandarin juice.

Jessica realises that she has forgotten about her carrots and they are black and charred. She hopes to be able to prepare another lot of carrots in the remaining time.

Jessica returns to the bench and gets some more carrots but cannot find another mandarin. She searches her bench for the remaining half she had earlier and Nick comes along and gives her half of one of his mandarins.

It’s time to start plating up with two minutes remaining.

Time is up! It’s time for judging.

Next up is Nick’s dish. The judges say the sauce looks good. Gary thinks it could be Jessica’s dish. Gary says he doesn’t care who cooked the dish, he loves it. George says there is a lot of delicious sweetness in the dish, it’s yummy and there’s not much he can fault in the dish.

Gary says this is the closest immunity pin challenge they have had so far.

It’s time for the scores.

It came down to one point. Jessica didn’t win an immunity pin on Masterchef tonight.

2 thoughts on “Masterchef Immunity Challenge – Jacqui vs Jessica vs Matthew”