Tonight’s Masterchef Elimination was a cook off between Georgia, John, Jarrod, Fiona and Amy. They were the losers last night in the tag team challenge.The contestants had to cook five dishes today, the judges will be Marco, Matt, Gary, George and themselves. They will sit and try their own dish at the judging table. Who was eliminated from Masterchef? Find out below. 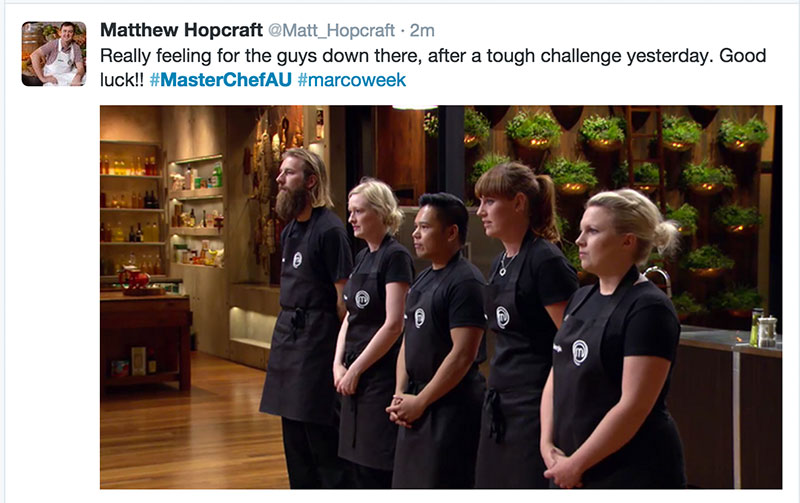 Georgia was going to cook a Panko crusted tuna with a salad, but couldn’t find any tuna in the pantry. She decided to go with prawns instead.

Amy is making quail tortellini in a burnt butter sauce. She wants to put 5 on each plate, thats 25 perfect tortellini that she needs to cook.

John had some problems, his roulades weren’t tied well, and they weren’t even sizes, that meant that they wouldn’t cook evenly and they wouldn’t caramelise evenly. He put it in the oven. When he took it out and cut it up, it was way undercooked.

Jarrod was going well. Matt and Marco came over and tasted his croquettes, they were worried about the texture. But Jarrod persisted. When he had cooked them, he put them on a plate, was running to get his dish finished, he tripped and his croquettes went flying, squishing and breaking all over the floor. Could this mean he is eliminated from Masterchef? 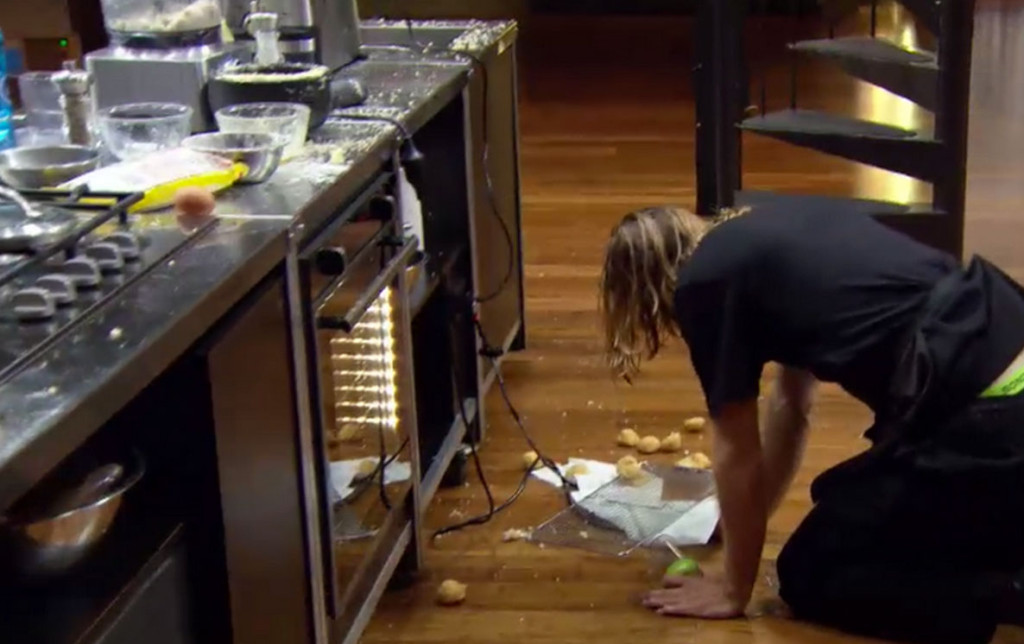 Will this get Jarrod eliminated? Thankfully he had a few croquettes left, instead of of a couple per plate, it will have to be one per plate.

First to be judged was John. His consistency was quite good. George asked if the chicken was cooked, he said it was. He sat down with the judges. Gary said there were problems with the chicken, it wasn’t consistently cooked and he could have dropped everything else on the plate. Marco said, the more he puts on the plate, the more he has to criticise, but he liked this dish. George and Gary both loved the sauce.

Next up was Georgia. Her Panko coated prawn recipe had three prawns per plate, it was “amazingly consistent”. They asked George if it was good, she said she liked it. The other judges liked it too. Marco said it was a very pretty dish and was the best dish he had eaten in the Masterchef kitchen this week.

Amy’s Quail tortellini with fennel and burnt sage leaves looked good, it was also a very consistent dish. Gary loved the fact that she got all of the tortellini made. George said all the emphasis was on tortellini and the sauce was lacking.

Jarrod was worried about his dish. It was missing something, but he didn’t know what. It was also missing the aioli which was supposed to tie the dish together. George said Gazpacho should only take 15 minutes, it was missing vinegar. Marco said the croquette was pointless, you should make it with raw fish, so it cooks when you fry it.

Next was Fiona’s chicken and leek pie. The pastry was too buttery, it was terrible but at least the filling was tasty.

The judges announce John, Georgia and Amy were safe, it was between Jarrod and Fiona. Fiona was safe because her dish was at least partially tasty.

Jarrod was eliminated from Masterchef tonight.