Tonight is the second Masterchef elimination. It is Andrew, Jamie, James and Rose battling it out tonight, who will be eliminated in Masterchef tonight? 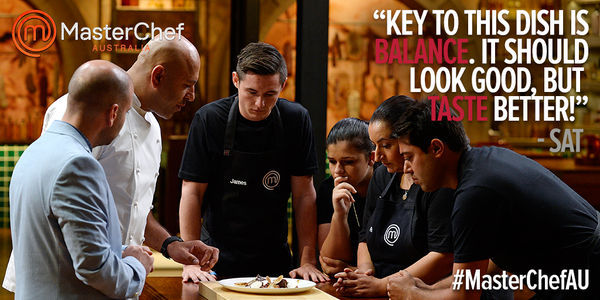 It was a recreation test, the guest chef was Sat Bains, from the UK he runs the restaurant Sat Bains. His dish tonight was Beef and Mushrooms. It was a two michelin star dish and the contestants had two and a half hours to recreate the dish.

The contestants were straight out of the gates, quick from the start. Jamie made the first mistake, he put his beef cheeks in the pressure cooker but forgot to press start. It was a big mistake as he didn’t notice until at least 10 minutes in and they needed at least 45 minutes to cook.

After about an hour, Andrea put all her ingredients in the Thermomix, but forgot to put on the lid and blew dust all over the room and James forgot to add the stock to his mushroom ketchup and basically made hard gelatinous soy sauce. He had to start it again.

Jamie was about to start his cornichons, but he couldn’t open the jar, he tapped it on the bench and accidentally smashed it. He couldn’t use them. He managed to borrow some off Andrea, but only grabbed two.

It was getting tight at the end. Jamie didn’t reduce his sauce enough, Rose forgot to make her pickled onions and some of them piped their sauce on plate instead of gently placing small drops. All the contestants got something on the plate though in the end.

The first contestant to be judged was Jamie. There was no depth in his sauce, it wasn’t reduced enough, it was like a “light onion gravy”. It had cook pickled onions and the beef cheek was cooked well. The problem with this dish was the sauce. There were some good things on the plate, but some bad ones too.

Next up was Rose. She was missing the pickled onions. Her sauce was good though. The beef cheek was beautifully cooked and the mushroom ketchup was spot on. The missing ingredient was forgivable because it was a great dish.

Next was Andrea. The judges were impressed she was only 18 and serving up such a good looking dish. The beef was cooked perfectly, the sauce was amazing, the missing tartare wasn’t too much of an issue. Sat was a bit “flabbergasted”.

Finally it was James’ turn to be judged. The dish looked good. The sauce was really week, it was like “flavoured water”. The seasoning was off in the tartare and the salt and pepper balance was out. It wasn’t a strong dish. It has come down to Jamie and James. Will taste and balance of all the elements win over a complete dish?