Tonight was a Masterchef Elimination. It was the losers from last night’s challenge, Andrea, Jacqui and John. It is also Marco Pierre White week, so the elimination challenge tonight is to recreate one of his dishes. 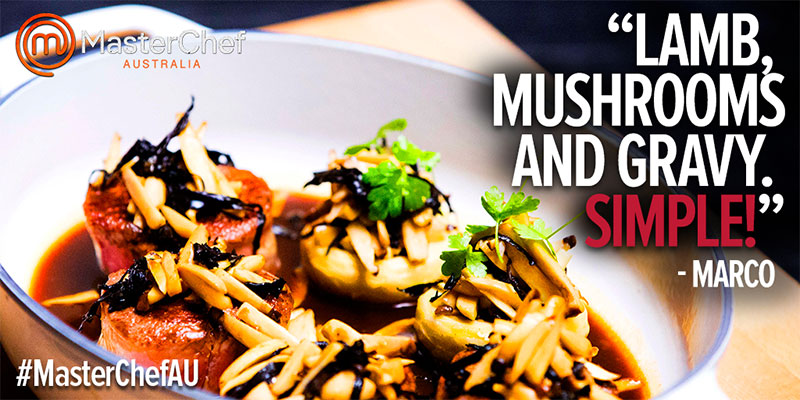 Marco demonstrated how to butcher and create a noisette of lamb. It was quite a big task, they basically had to butcher their own meat.

Right at the start, Andrea cut her finger butchering the meat. It was bad, real bad. After some medical attention and a bit of a delay, she could continue.

As Jacqui is cooking her lamb in the pan she realises that she has missed a key step by forgetting to tie the string around the lamb. As she realises this, one of her pieces of lamb splits open.

The contestants finish. Andrea and Jacqui did not complete their dish and Jacqui realises she has left the fat around her lamb which she should have removed. John has completed his dish and is feeling relieved and emotional.

It’s time for the tasting and judging.

John is first up. The dish looks quite similar to Marco’s and the judges are immediately impressed. The meat is well cooked. Gary says he is very pleased with John. Matt says the noisettes are all the same size and cooked perfectly. Marco says he has cooked to perfection.

Next up is Jacqui. She is frustrated as she left the skin on the noisettes. Marco points out the immediate faults with the dish. Her artichokes seem undercooked. Matt says she has done a really good job. George says the lamb is cooked well and the dish is seasoned well.

Finally it’s time to taste and judge Andrea’s dish. Andrea hasn’t put her mushrooms on the lamb and the artichokes are different sizes. The judges are also concerned about inconsistency in the cooking of the lamb. Some were cooked perfectly and some underdone. Matt comments that he likes the sauce.

George says there was a dish that really stood out from the rest. It was John’s dish. Now its between Jacqui and Andrea. As Andrea’s meat was undercooked she is going home.

Andrea has been eliminated tonight from Masterchef 2015.