MasterChef Elimination Tonight was the losers of last night’s team challenge, Rose, Jamie, Jacqui, Ava, Stephen, Billie, Ashleigh, Melita and Anna were all up for elimination. Who was eliminated from MasterChef tonight?

The night was a Thai challenge, it was three rounds. In each round, the contestants had to make one dish. 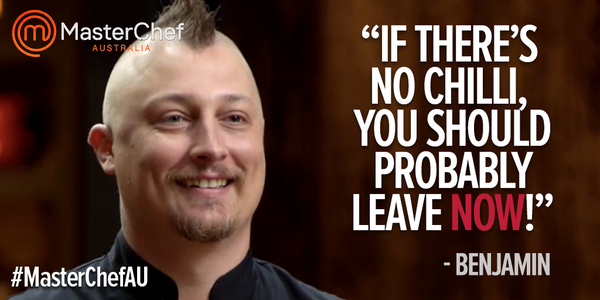 This elimination round was a 10 minute challenge. The contestants only had 10 minutes to cook a thai dish. The top 3 contestants from this round would be safe.

It was a frantic round and the time went really fast. The first to be judged was Anna’s mussels in a coconut broth recipe. The judges thought it was delicious.

Ashleigh made a Crispy soft shell crab with herb salad recipe. It was a “fantastic job” in only 10 minutes.

Billie’s dish was ok, Jamie’s madarin scallops were really good and by using mandarin made the scallops shine.

Rose’s dish “cucumber and papaya salad” was a bit of a disaster, she dropped one of the scallops when she was plating up, so it only had one scallop on it. The dressing needs more balancing and scallops, obviously.

The top three dishes belong to Anna, Billie and Jamie.

Round two is 20 minutes long. The top three dishes in this round will be safe and the bottom three will go into the final round.

First up is Stephen. He has cooked a thai prawn coconut curry. The judges really enjoyed his dish. He is instantly sent up to the gantry and is safe from elimination.

Next up is Rose. She has cooked a chilli salt snapper with betel leaf.

With Stephen already safe there are only two more safe spots. The two safe contestants are Ava and Ashleigh.

In the final round the remaining contestants are Rose, Jacqui and Melita.

The final round is 30 minutes long.

Rose is making a mince dish served with rice and a fried egg on top.

Jacqui is making chicken skewers with a salad.

Jacqui is up first with her chicken skewers with a cucumber salad and coconut rice. The judges like the taste of the chicken but they question the salad and the flavours all together.

Rose is up next with a chicken larb with a fried egg and shallots. Gary says it’s a clever dish, it has plenty of flavour.

Melita is last up. She is quite emotional, she loves thai food, both cooking and eating it. She has made a red thai chicken curry. The judges serve up the dish for tasting and discover that there is no chicken to serve up. The judges seem to enjoy the dish despite the fact that they couldn’t find any chicken.

Rose is safe. Jacqui is safe.

Melita was eliminated from Masterchef tonight.