Tonight was the Masterchef Semi Final. Who was eliminated tonight and who is going into the Masterchef 2015 Grand Final? The contestants have four hours and an open pantry, they can cook anything they like but had to make 20 mains and 20 desserts. One person will be eliminated.

Georgia and Billie both started by making a plan. She put together a list of ingredients. Jessica knew what she was going to cook. She ran to the pantry and is making a roast pork belly with a dashi smoked yoghurt and a roast peach. 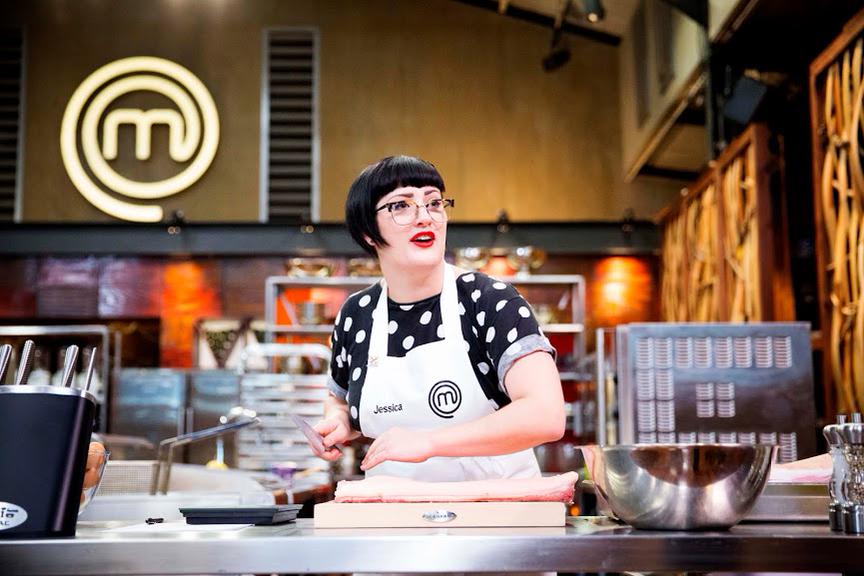 Georgia is making cured ocean trout with a variety of 11 different sides including dill, mayonnaise and cucumber. Billie is making a braised lamb shank with suvee backstrap with mint sauce and peas.

Billie has her shanks so she had to get started on the long parts of her dessert. She is making a spider, a take on the classic ice cream and lemonade, but with dill ice cream, a fizz of fruit, macadamia praline and rhubarb. She got her ice cream on.

Meanwhile, Georgia was still filleting her fish, she started on the pin bone. Shannon came over and questioned her filleting, it wasn’t the best filleting he had ever seen. He also told her 80 grams of trout wasn’t enough, it should probably be 120 grams. Georgia was stressed for time.

Jessica was onto starting her dessert, she was making a white chocolate dome with a grapefruit curd and popcorn sponge. Shannon came over and questioned her choice of three different components.

For dessert, Georgia was making a ygohurt parfait with mango and chilli sorbet.

Billies lamb shanks were ready. She took them out of the pressure cooker and the meat was falling off the bone. She had the idea of rolling them into a cylinder, but the meat wasn’t fine enough and it wasn’t working, she had to think of something else. At that point she remembered her roast rhubarb, but it was too late, it was overcooked. She had it on the menu so had to do something.

All of the contestants were hurrying, this meant they were making mistakes. Jessica was making a butter crumb but burnt it. She decided to blitz some of her sponge and add some popping candy instead.

Billie had recovered from her rhubarb mistake by cooking them again. She had decided to use circles instead of cylinders for her lamb.

There was an hour to go.

Georgia realised how little time was left and she was in trouble, she still had a lot of elements to do. Jessica was starting to smoke her yoghurt. The guests were starting to arrive. Jessica took out her pork belly, it looked great.

Time was up, it was service time. Georgia still had a lot to do. Orders started coming in. Billie was first to get her dishes out, followed by Jessica. Georgia still didn’t have a dish out.

Jessica has put out 16 dishes of pork, Georgia still hasn’t had one out yet. Billies dish looked great, she was keeping pace. Her dish was first to arrive at the judges table.

Billie’s dish was “braised lamb and backstrap with peas, pear and mint puree”. The judges loved the look of the dish. Gary said it was hard to stop eating it, it was absolutely delicious, she nailed it. George said she nailed both of the lambs, the highlight was the crustiness of the shank. It was “top shelf cooking”. Matt said it was a “really sophisticated” and on a whole other level.

Meanwhile, Georgia was still struggling to plate up, Billie had all of her mains out.

Next to the judges table was Jessica’s dish. It was pork belly with smoked yoghurt shisho and poached quince. Gary said the presentation was perfect. The pork crackling was fantastic. George said he was mesmerised by its appearance and the taste was amazing. Matt said the balance of flavours was amazing, he hadn’t had crackling this good in the Masterchef kitchen.

Jessica’s dishes were all out, Georgia was still very far away, she had another 12 mains to go. Billie was starting on her dessert.

Finally Georgia’s dish made it to the judges, it was cured ocean trout with crispy skin, cucumber and apple. Matt said it was a “technicolour explosion”. Gary said it was delicious. George said he was “falling in love with the chefiness of it”.

It was dessert time. Georgia finally finished all her mains. The first order was in.

Billie’s Dill and rhubarb spider made it to the judges table. The judges loved it. Gary said it was “absolutely sensational”. George said it was full of flavours, it was amazing. Matt said it was zingy, tangy and sweet. George said if your got that into the restaurant you would want to meet the chef. 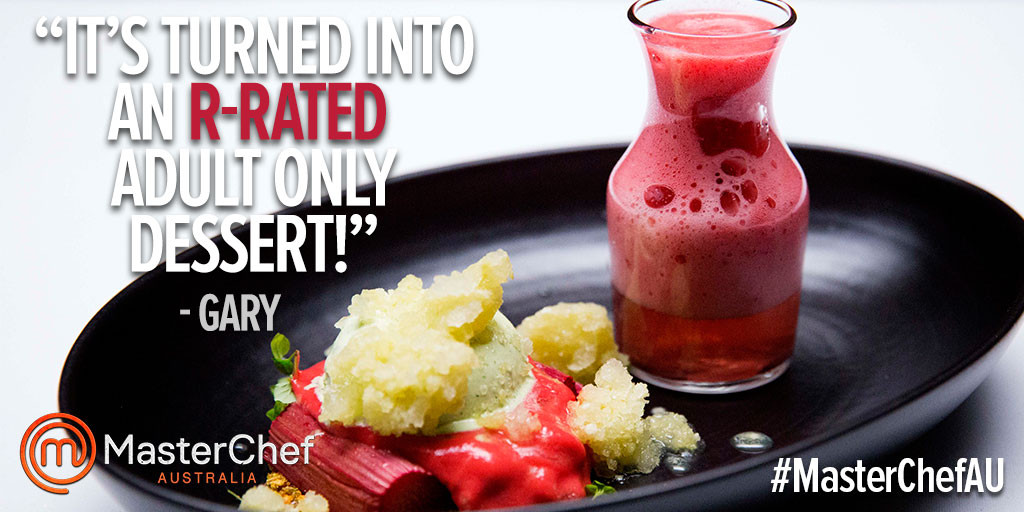 Next was Jessica’s dessert, Grapefruit and popcorn. The judges loved the look of the dessert. The cracked it open and a gel oozed out. They all loved the dish. The only negative George had, was the gel had a gelatine taste. Matt said the sponge was a bit heavy and questioned whether white chocolate, popcorn and grapefruit all worked together.

Finally, Georgia’s mango sorbet with vanilla yoghurt parfait was up. Matt said it looks beautiful and smells amazing but you could see the pressure Georgia was going through on the plate. George said “this is my favourite dessert”, he loved it because it had creamy and sugary. Matt loved the coriander. 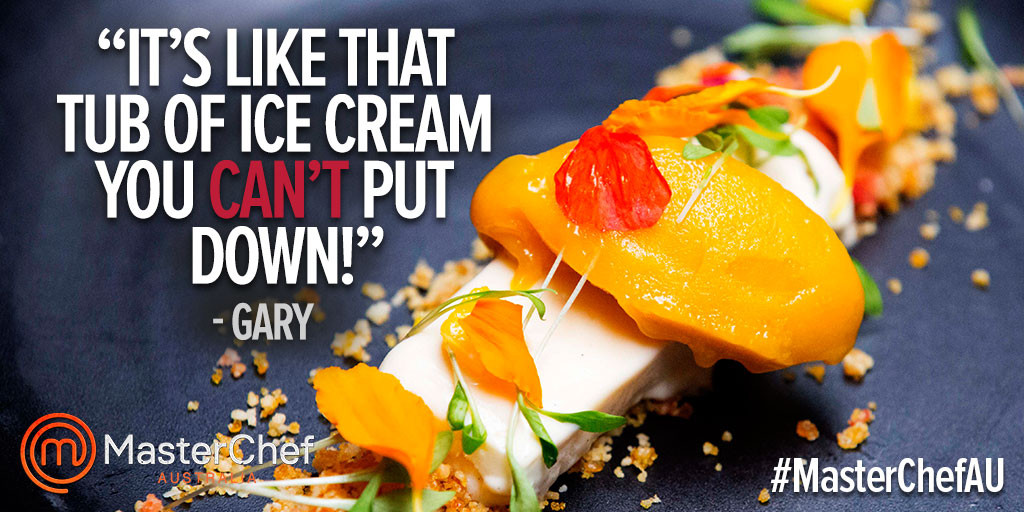 Who will be eliminated from Masterchef tonight? It was judging time.

Billie was first, her main was Georges favourite dish of the night. George said her dishes were faultless and that is why she was through to the final. It was down to Jessica and Georgia.

Matt said deliciousness in the competition wins over performance, so she is safe.

Jessica was eliminated from Masterchef tonight.