Tonight was the final Mystery Box for 2015. Each contestant is able to choose one ingredient, then the judges will pick the rest of the ingredients. Georgia went first and chose figs, Jessica chose prawns, Reynold chose almonds, Sara chose squid and Billie chose beetroot. 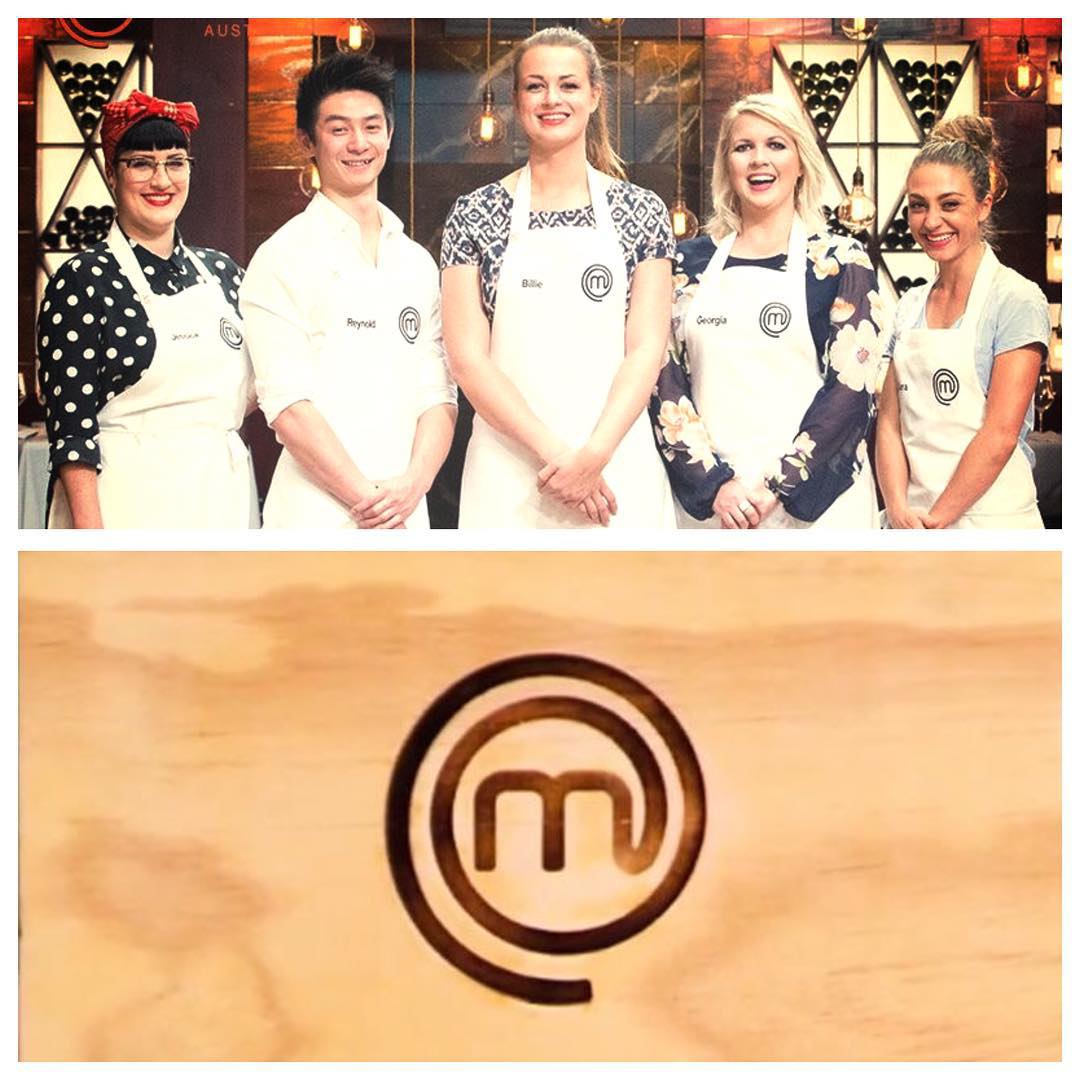 It was time for the judges to choose their ingredients. George chose lemons, Gary chose chocolate and Matt chose dill.

The contestants had 60 minutes to make a dish and had to use at least one of the mystery box ingredients, the winner will get the advantage in the invention test next.

Sara was using the beetroot to colour her squid and make it purple. The judges came over and Gary said he would “avoid using beetroot with squid”. Georgia was making a dessert with beetroot poached figs and a ganache. Reynold was making a dessert, an almond cake with a lemon curd. Jessica was making a Japanese prawn flavoured steamed custard. Billie is making a beetroot, dill and lemon stack. The judges came over and George said it can’t be a standard “stack from the 90s”, it had to stand out. She decided to make a ricotta to add to the stack.

Sara decided to go against the judges recommendation and used the beetroot to colour the squid.

The first dish to be tasted was Sara’s “Textures of squid”. Gary said it looked “spectacular” and george said it was the best presented dish in a mystery box challenge. George also said it was the best tasting food she has put up in the competition. Matt loved it and Gary said there was not much left for her to learn in creativity.

Next was Reynold’s “Almond with Lemon”. The judges loved it.

Georgia’s “Chocolate Dacquoise” looked “wonderful”. Matt said the creaminess of the beetroot cream meant there wasn’t a need for ice cream. George said it “works” and it was “incredible”.

Jessica cooked a Prawn Chawanmushi with Squid Noodles recipe. Gary said there were few places you could go and get these flavours. Matt said it needed just a touch more salt.

Finally it was Billie’s turn. She cooked a Beetroot and Dill stack. She presented it in a modern way. Gary loved the intensity of the beetroot flavour. George said it was a vegetarian dish that could sit on any top restaurant’s menu.

The winner of round 1 was Sara.

The advatage was that Sara was able to choose a “food trend”. The options were Cheeks and Jowls, Peel to Stem and Savoury Sweets. She chose Peel to Stem. The contestants had to make a dish that used the whole fruit or vegetable in the dish. The Masterchef contestants had 60 minutes to cook and had an open pantry. The bottom 3 will go through to the next pressure test.

Billie chose cauliflower. The judges came over to Billie, she didn’t have a dish in mind yet, but the judges said cauliflower was probably the best ingredient to choose.

Reynold chose Celery. He was making poached chicken with a celery puree.

Jessica was making a stewed silverbeet.

The judges came over to Reynold and pointed out that the chicken wasn’t the main ingredient in the challenge. He didn’t know what to do, it was 20 minutes into the challenge, he had to figure something out. He was going to make a celery puree with mushrooms and garnish it with the celery leaves.

Georgia was using parsnips and baby carrots. Matt came over and wasn’t sure it was all going to work together, Georgia wanted to make something challenging.

There’s 20 minutes remaining. Reynold is still working out what to do with his celery dish. He is making a celery puree but it is too watery. He’s not sure what to do. He tastes the celery puree and decides that it could be a soup instead.

Sara is happy with her dish so far however she is still unsure about what she is going to do with the watermelon skin.

The contestants have 4 minutes remaining and have started to plate up.

Billie’s dish is up next. She has made a cauliflower puree and picked stems with crumbs and leaves. Gary say it looks like a clever dish. George says he loves it, its a clever choice of vegetable and she has done so much. He says it is an all round brilliant dish. Gary says it is a delicious and clever dish. Matt says it is a great start to finals week.

The next dish up for tasting belongs to Jessica. She has made stewed silverbeet and chickpea with a stem puree. Matt says you give us creamy and crunchy and all the flavours we love. Gary says he is not sure if silverbeet is the hero.

Georgia is up next. She has made parsnips with baby carrots. George asks why she used two vegetables. He says it is a yummy and tasty dish. Gary agrees and loves it too. Matt said well done.

Finally it is Reynold’s turn to have his dish tasted. He has made a braised celery heart and celery veloutee. Gary says it is a very pretty dish. Matt says that it is delicious. Gary says the soup is really tasty and healthy.

It is difficult to tell which contestants will be going into the elimination tomorrow.

The contestants going into tomorrow’s pressure test are Sara, Jessica and Reynold.

Georgia and Billie are both safe.