Tonight was the Gelato Messina Elimination and it is Tracy, Sarah and Emelia were up for elimination. Tracy has an immunity pin, will she use it tonight? The contestants had to cook a choc-top prepared by Gelato Messina’s head chef Nick Palumbo. 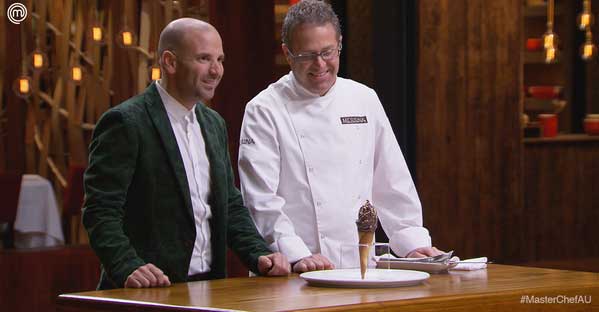 The first decision in the episode was by Tracy, she decided to use her immunity pin, which means she will be replaced by Renae tonight.

Sarah made a mistake on the first step of the dish with her almonds, she turned them into a paste and instead of starting them again, she tried to dry them out in the oven and re-blend them. Emelia looked like she didn’t take her caramel far enough, Renae on the other hand tried to get it as close as possible and may have burnt them. She poored her cream in and it almost boiled over, but it had a good colour.

Emelia moved on to her amaretti, got that done very quickly and moved on to the Italian Meringue. Emelia was on track and ahead of the rest of the contestants.

Renae was close behind after getting her caramel ice cream in the blast chiller. Sarah was struggling, her almond meal was still not dry enough.

Sarah was struggling behind the other two, they were up to their cones and Sarah still had several components to make. She tried to catch up by making 4 cones at once (the contestants had to make 4 successful choc-tops), she didn’t have any practice cones in the oven. She managed to get them all rolled successfully.

With time up all the contestants got their elements ready. They then had 15 minutes to assemble their ice creams and present them to the judges.

The first contestant to be judged was Renae. Her ice creams looked a bit rough when she put them together. All the ingredients were in there. She nailed the salted caramel, it was cery well done. Nick was really really impresed and Gary said she did an amazing job. She set a high benchmark for the next contestants.

Next up was Sarah. Her ice cream was much more pale than Renae’s, the caramel hadn’t been taken far enough. It was described as “salty milk”. It had thrown out the whole dessert.

Renae was definitely safe. Nick said she would have difficulty tasting the difference between his own and hers if he had his eyes closed.

It was down to Emelia and Sarah. Emelia’s was just slightly better than Sarah’s, it was a close call but Sarah was eliminated from Masterchef tonight.

One thought on “Will Tracy use her immunity pin? Messina Gelati Elimination.”