Who is eliminated tonight? It’s Laura, Georgia, Renae and Amy who must replicate an Indian cuisine, cooked by the Indian Masterchef host and Michelin Star chef Vikkas Khanna. The dish the contestants have to cook was Rose-tea Smoked Chicken Tikka Masala. 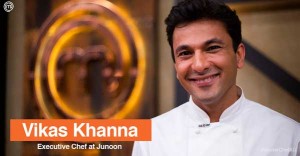 Renae was off to a bad start. She said she couldn’t follow recipes and just made things up as she went. It started with her spice, she just estimated the spices and even added more than in the recipe on purpose. Will it taste the same?

Georgia had issues rolling her chicken roulade and forgot to turn on her sous-vide machine so she was a bit behind with her chicken component.

The rest of the contestants were to the wire getting their chicken in. Renae didn’t tie her chicken, instead she rolled it tightly in glad wrap and tied the ends to make up some time. Georgia’s machine wasn’t up to temperature but she put her chicken in anyway.

Laura had problems with her rice papadum, she forgot the orange blossom and had to redo it.

The chickens came out of the sous vide machine. Georgia and Laura’s both looked a bit raw, Lauras in particular. Next, they had to pan fry it. Hopefully Laura and Georgia will cook it long enough. With 5 minutes to go, the contestants had to do the rice papadum, they didn’t all come out very well.

With 30 seconds to go, Laura got her chicken on the plate but thinks its raw, she looked devastated. Amy’s rice papadum was a disaster. Renae did very well, she was used to making curries at home. Georgia’s roulade fell apart in the pan so it didn’t look the best on the plate, she was upset too.

There was a bit of an “i love you” between Georgia and Laura, some people think they may have been a lesbian couple in the house, not just “best friends”. We just think they were affectionate friends, what do you think?

First up to be judged was Renae. She was relieved to get it all on the plate but was starting to doubt herself, having changed the recipe. The smokeyness was perfect, the spice was a little bit over, but it was a good combination of flavours. The rice was a bit vinegary but the chicken was cooked perfectly.

Next up was Amy, her dish was fantastic. It was “India in one mouthful”, the smokeyness was perfect and the chicken was very precise. The judges loved this dish.

Georgia was next. It was her first pressure test since the top 50. She was very doubtful about her dish after her roulade had fallen apart. Her chicken was caramelised on the outside well, but the inside was inconstant, overcooked and tough in places. Her sauce was very rustic.

Finally it was Laura’s turn to be judged. Was her chicken raw? No, it was cooked beautiful. She rectified the chicken in the pan. The stuffing was good, but the sauce was a bit overcooked, the flavour wasn’t there. It was down to Georgia and Laura.

The contestant eliminated tonight was Georgia

One thought on “Who is eliminated tonight? Laura, Georgia, Renae or Amy?”