Home » Masterchef 2014 » What was in the Mystery Box in World Cup Week?

Half the contestants backed themselves. They were asked a series of questions starting with easy ones such as which country is beef vindaloo from? And, what is the ratio of flat to flour in short crust pastry? (2 parts flour 1 part fat).

Jamie was asked “What kind of pastry is used to make baklava?” He got this wrong (the correct answer was Filo pastry)

What meat is used in vitello tonnato? Renae guessed veal correctly. Laura was incorrect with the difference between beschemale and mournay sauce (the answer was cheese). Emelia went out on the question “If you were in Croatia what would you get if you ordered bordetto?”, the answer was fish stew.

Amy got the answer to “what is injera?” wrong (it’s a flatbread). This left Renae and Tracy to compete in the mystery box challenge.

What was in the mystery box?

Tracy was really focused in this competition, she cooked zucchini flowers with yabbies, watercress and corn puree. She aerated the water in the batter with the . Gary said it was the best batter he had ever tasted on Masterchef. It was a great flavour combination in the dish. The downside was there were too many combinations, the yabbies didn’t go with the goats cheese.

Renae was ecstatic about there being dates, she had a technique called “date leather” which she rolled the dates into a thin sheet. 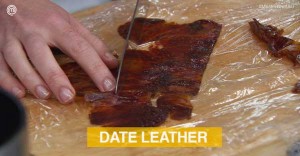 Her dish was zucchini flowers and yabbies with date leather. She deep fried the zucchini flowers with her own batter recipe, not tempura. Her batter wasn’t as good as Tracy’s but the number of ingredients she used was more sensible. The dates overpowered the dish a bit.

The winner of the mystery box challenge was Tracy

The contestants had to organise themselves into three groups. They had to do the knife challenge to see which combination of country and appliances they were allowed to use. 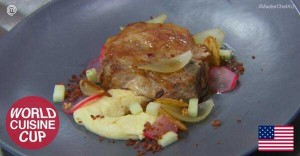 Kira, Ben, Colin – Morrocan, Ice cream maker and Oven. They cooked a snapper with a chermoula, yoghurt ice cream and apricot sorbet and a quinoa salad.

The first dishes to be judged were the American dishes. The pan-fried pork was cooked really well and the popcorn grits were delicious. The judges loved it. The dessert was “up there with some of the best desserts on Masterchef”. George said it was one of the best desserts he’s ever eaten.

The Vietnamese team struggled with the Vietnamese dish. The judges were happy with combination of flavours in the rice pa. The prawns were a bit dry and weren’t coated enough. The crab was “just delicious”. Both dishes were received well.

Team morocco were the last team. The snapper was cooked spot on and the chermoula and salad worked well together. The dessert was good, the flavours were great the apricot sorbet just worked.

The team going in to elimination is the Veitnamese team, Laura, Georgia and Amy.