The Masterchef Team Challenge tonight was to cook three dishes in 90 minutes. Each team had one captain and one assistant who went to a restaurant and had to memorise how to cook three dishes. They then had to relay these dishes to their team. The team had to cook them without a recipe and serve each dish to 60 guests. The loser of the competition will go to an elimination cook off tomorrow night. 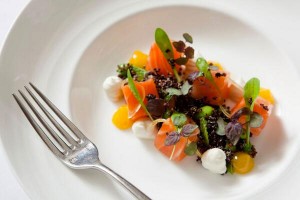 The red team was captained by Jamie and assisted by Emilia. Their dishes were:

Blue team was captained by Sarah and assted by Tash. Their dishes were:

The blue team did well with their entree. They got all of their dishes done on time and out to their customers. The red team struggled to get their entree out and only just made it. It put them behind for the main.

The marron was a little bit undercooked for Matt, but spot on for everyone else. It still had all the components on the plate. The green sauce was also a bit bitter compared to the original dish.

The blue team’s sashimi dish was very similar to the origin dish. The balance of flavours were beautiful and the judges were very impressed.

The blue team struggled with the broth, they cooked it to what they remembered but it didn’t taste right. They remade the broth and got there in time. The dish looked almost identical to the original, but the broth was too sweet, it was missing the balance of the original dish. Matt was impressed with the rest of the dish

The red team got the main off without a hitch. It was a close resemblance to the original and Matt thought it was restaurant quality.

The red team had a few issues with their pana cota. It was melting when they were trying to remove them from their tins but the caramel was sticking to the top. They eventually got the dishes constructed and out the door. They eventually plated most of the pana cota without the caramel. It looked different to the original, the pana cota was nice though and had a good texture but the sauce was also not very good.

The blue team’s cheesecake almost missed the honey sauce because they only remembered it half way though the final time. The jelly was ok, but it wasn’t as set as the original. The blue team had to rush to get the sorbet on the plate as they left it until the very last minute to stop it melting. The dish again looked identical. It was “wow”, “so good”, the only issue was the jelly. Gary reckoned the crumb was better than the original, the guest chef was very proud.

The overall winner tonight was the blue team