Masterchef team challenge today during Tracy’s power week was to cook in the great Australian outdoors. They were in lorne at a lighthouse and had to cook for 20 fresh food producers. They had a very limited pantry and each team had to buy their ingredients with time.

Because of her power, Tracy had the choice of her team, she chose to be captain and picked her red team: 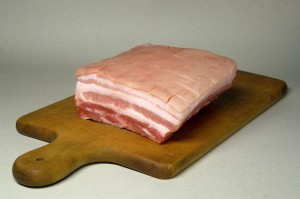 The contestants had 5 hours worth of time and Tracy was able to pick the first two out of three proteins. She chose pork for 45 minutes, shellfish for 30 minutes. Laura chose lamb (60 minutes) and snapper (60 minutes). Tracy picked crayfish for 45 minutes and Laura had the duck for 45 minutes.

Next up were the veggies, Laura picked the potatoes and greens, Tracy chose the greens, pumpkins and carrots.

This left the blue team with an hour and 40 minutes to cook their dish and the red team had 2 hours and 15 minutes.

Laura struggled with her snapper, it was massive and wouldn’t fit in the oven, so Laura decided to slice off the two fillets. Unfortunately she couldn’t get the pin bones out. She decided to go against Gary’s suggestion of removing the when it is cooked and cut them out.

Tracy was worried about time, they had a lot of components. Laura thought her team was going well, but Brent had an issue cooking the lamb on the stove top because of the wind and had to resort to using the oven. Amy’s potatoes on the blue team weren’t cooking on the stove top either.

Cleverly, Jamie made a little fort for his muscles on the stove top to stop the wind and keep the heat in. The blue team followed.

The teams rushed towards the end but they all got their dishes done in time.

George said it was delicious food, delicious cooking and well planned and executed. The bread was a good touch. The producers were happy with the way all their ingredients were cooked. There weren’t any negatives to their spread.

The blue team was next, they cooked:

The judges loved the snapper, it was delicious and fresh. The potato salad was “cracking”. Matt liked that they made the effort to make something different. The producers liked that they used hay to smoke the lamb but it was overcooked. Unfortunately, the duck was also little overcooked. The weren’t sure who have made the better set of dishes.

This means that Laura, Renae, Colin, Amy and Brent are up for elimination tomorrow night.