Tonight is the Masterchef Croquembouche Elimination. The contestants who are up for elimination tonight are Jamie, Colin and Kira. We know that Colin isn’t good at desserts. Who will be eliminated on Masterchef tonight? 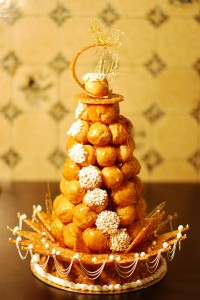 The contestants had no full recipe for this challenge. The recipe was divided into 3 parts, caramel recipe, creme patissiere and choux pastry. Tracy, with her power apron was able to decide which part of the recipe will be given to each contestant. She knew Colin needed the caramel recipe so gave him that. She knew Jamie had a good choux pastry recipe but gave him that recipe for strategy and to give the contestants a level playing field. Kira didn’t know how to make choux pastry, so had to make up her pastry recipe but was given the creme patissiere recipe.

Jamie was first to get his choux on the tray, followed by Colin. Kira was last, but her pastry looked a bit wet.

Colin’s profiteroles were looking great, he decided to make some more so that he had some spares.

Jamie kept taking his creme patissiere on and off the stove to stop it boiling, but he stopped it thickening by doing that. Colin understood the process and let his boil for a minute.

Gary and George tasted Jamie’s creme patissiere and said it was too thin and tasted floury. He decided to start it again, make a thicker version and combine the two. Colin and Kira’s creme patissiere looked good and they started piping it in.

Gary gave Jamie some more help, telling him the egg’s won’t split, he then left the creme patissiere on the stove longer and made it successfully.

Kira and Colin were on to the caramel, Colin had the recipe for this and all contestants did this with no problem. Jamie’s caramel was very dark.

Colin and Kira were first to construct their croquembouches, Jamie followed soon after. All three came out of their tins succesfully. Colin struggle a little with the spun sugar toffee, but got it in the end.

The first croquembouche to be judged on Masterchef Australia 2014 was Colin’s. It looked beautiful, there wasn’t as much spun toffee but the “tower of tight buns” was well constructed. There was lots of beautiful and smooth custard, perfect size, greatly constructed.

Jamie’s was next. His tower was “better than the example one we put up”, it looked great. The profiterole Gary chose had no creme patissiere in it. Gary loved the pastry, George thought it was “fabulous”, Matt thought it was the best croquembouche he’d had in Masterchef ever, but the missing filling in some of the buns was an issue.

Finally it was Kira’s turn. The judges loved the creme patissiere, it was the best of the lot, but the profiteroles weren’t great, they were biscuity. A bit like an overcooked cake.

Each contestant’s croquembouche had one issue. But Kira’s biscuity profiteroles were the biggest mistake.

One thought on “Masterchef Croquembouche Elimination”