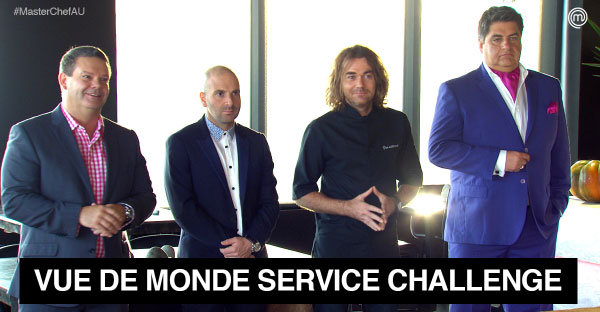 Tonight on Masterchef 2014 Finals Week the contestants, Jamie, Emelia and Brent, had to do a service at Shannon Bennet’s Vue De Monde. Laura was already through to finals week so did not have to participate in this challenge. The winner would be able to see the recipe for the pressure test tomorrow night and practice it overnight.

There were three dishes, entree, main and dessert. The contestants pulled knives to decide who will choose which dish. 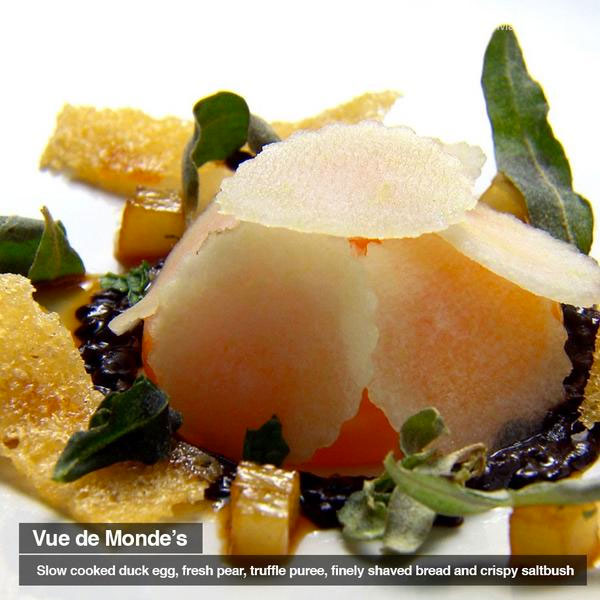 Next was Brent, he chose the main which was blackmore wagyu beef with apple and ox tongue. 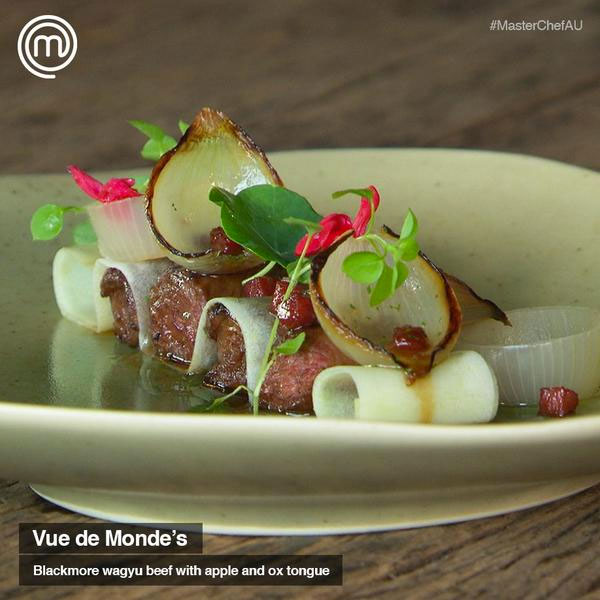 Finally, Jamie was left with dessert. It was a tonka bean souffle, served with warm chocolate mousse and smoked chocolate ice cream.

The contestants had 2 1/2 hours to prepare for service and each had a chef who will be able to give them advice occasionally and will be cooking other dishes for the guests. Within 20 minutes, Jamie was having issues with his souffle, it had lumps. One of the ingredients he had to grate wasn’t grated fine enough. If there were lumps in the mixture the souffle wouldn’t rise. His chef had the idea to blend it in an industrial strength blender, which seemed to work.

The then had to put the mixture into a sous vide machine, but the bag exploded. This set him back even more, he had to mop it up to keep the kitchen clean.

Emelia’s dish was the first dish that would be going out, so she had to have everything ready by the end of their preparation time. She had issues. Her cutting of the onions were nowhere near fine enough and after half an hour she had to start them again.

She had issues with her bread not being sliced finely enough either. The chef had to help her  with her technique. She had 8 elements to her dish, 4 of them had to be made to order. The orders started coming in and Emelia couldn’t keep up. Her dish required a lot of construction and she started holding up service. By the time she got 1/2 way through her dish, the four she was doing went cold and she had to start again. At this stage she was 9 dishes behind and had another 4 orders after that.

She was still falling behind, she now had 2 other chefs helping her plate and she was only doing the egg yolks.

The main course orders started coming in and it was up to Brent. He had about 15 orders in. He was also falling behind and was given 3 chefs to order around to help him plate up.

His dishes went to the judges and they looked “spot on”. The dish he put up was delicious and every component was as it was supposed to be.

Jamie’s orders were about to start coming in. He put some souffles in the oven in anticipation and hoped they would rise. His test souffles were good, they rose. When his orders started coming in, he had 37 orders.

Some of his souffles were terrible, they had holes in the side of them. There was no way he could get them all out. He was given Emelia and Brent to help him.

The judges got his dish, it looked exactly like Shannon’s, it tasted perfect. The judges couldn’t find a fault in his dish.

The winner tonight and the contestant who received tomorrow night’s recipe was Brent.

His performance in the kitchen was better than Jamie’s and none of his dishes were sent back by Shannon.