Home » Masterchef 2014 » First Elimination of Masterchef Australia 2014 – Who was Eliminated?

The first elimination of Masterchef Australia 2014 was set by Kylie Kwong and it was to show a basic understanding of Chinese ingredients and Chinese cooking. Who was eliminated tonight on Masterchef Australia 2014? The first round was to cook fried rice. There were some trick ingredients in the pantry that are not used in Chinese cooking to fool the contestants. They had 30 minutes and the top twelve contestants will be safe from the next round.

Spoiler – We will be describing the episode tonight including who is eliminated. 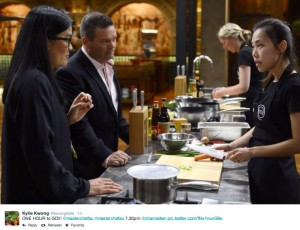 There were some great fried rice dishes, and a few mistakes. Byron forgot to put his prawns in and Deepali burnt her onions. Nicole took a risk by adding some non-traditional ingredients but it paid off.

The pressure was on Steven being of Chinese heritage. He also took a risk by putting prosciutto in his fried rice. Matt Preston thought using prosciutto was OK, but it should be a soft taste, not overpowering the dish.

Brendan stated at the start that he wasn’t very good at cooking Chinese food, in particular fried rice. He didn’t cook a traditional fried rice and used a lot of chilli.

The rest of the contestants had went through to round 2. One by one, each contestant had to name a Chinese ingredient on a table. The first three people who got an ingredient wrong would go into round 3.

After the first round, the ingredients got a bit harder. Some of the harder ingredients included chinese broccoli, tofu (silk tofu). Deepali picked the tofu and wasn’t able to name the exact kind tofu and was the first to the 3rd round. Rachael picked shrimp paste but called it “fish paste” which was incorrect and was the next to be through to round 3. Brendan was the last through to the third round. He incorrectly picked hoy sin sauce.

The 3rd round was 60 minutes to cook a Chinese inspired dish. They were able to use the ingredients that were guessed correctly in round 2. Brendan chose some pork, Deepali chose a chinese cabbage and Rachael chose the crab.

First up was Rachael, she cooked szechuan pepper and coriander crab with chinese broccoli. She was very confident cooking the dish, having caught and cooked her own crabs for years. Strangely, she deep fried the shell and put it on top.  The crab was cooked perfectly, and the dish was “incredible”. Kylie wants her crab recipe in her restaurant.

The next dish was Deepali’s duck and vegetable “pot stickers” with dipping sauce. Deepali had some issues with her dumplings sticking to the bottom of the pan when she was going to plate them up. She had a tough time in the kitchen and her dish didn’t look very substantial. She only cooked 3 “pot stickers” even though there were 4 judges. They were tasty but they didn’t have enough filling.

Brendan was last. He cooked Chinese pork loin with greens and lotus root chip. He wasn’t very confident with the ingredients, but the judges ere impressed with how it was presented. Biggest issue was that the port wasn’t cooked. Gary and George agreed that if that was served in a restaurant it would be sent back to the kitchen. Kylie said “I’m not eating that pork”. Unfortunately, like chicken, you should never eat raw pork so it must be cooked through completely. They questioned whether it was a chinese dish.

The judges couldn’t taste Brendan’s pork, and Brendan was eliminated from the competition.