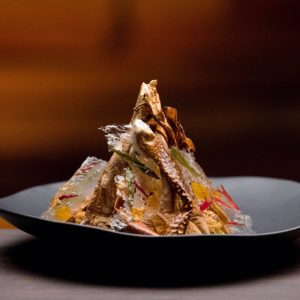 It is Diana vs Ben vs Eloise in tonight’s Masterchef Elimination. The pressure test is Kylie Millar’s Nest, Who will be eliminated tonight?

The contestants get off to a flying start. Both Ben and Diana smash through the first couple of elements. Eloise spends the first part of the cook reading the entire recipe. This has put her behind from the very beginning, but will it pay off later?

The first element to go wrong is Eloise’s parsnip puree, it is too thick, we will see how it turns out. Ben needs to make his caramel, but he burns it, it sets him back.

Eloise and Diana get up to their honeycomb, but Ben is now the one behind. The dish isn’t sweet, so this is a crucial element. Diana’s looks perfect, but Eloise’s is too dark and Ben’s is too flat. There is 15 minutes to go.

There are a lot of elements to go. Ben decides to make a second batch of honeycomb and hopes that this batch is better. Eloise is trying to make her parsnip bark. Eloise didn’t have time to re-do her honeycomb so she packs away her dark honeycomb ready for plating up. Ben is feeling happy with how he has cooked but then realises that he has made a mistake and will need to use his first batch of honeycomb which he was not originally happy with.

It’s time for the contestants to plate up their dishes for the judges. Diana is up first. She has 15 minutes to re-create Kylie’s dish. Diana successfully takes some of the yolk out of the egg and replaces it with some caramel filling. She then adds the parsnip bark, the marshmallow and is done. She takes her dish in to the judges. The judges are happy with how it looks and comment that the egg yolk was done well. Kylie says it tastes really nice, the caramel is a nice colour and the parsnip chips are not bitter. Gary says the flavours are good. Matt says the yolk was done really well.

Next up it’s Eloise’s turn to plate up her dish. She removes some egg from the yolk but her hands are shaking. She has split her first yolk. She tries a second yolk. Again she removes some egg from the yolk and fills it with caramel but she has split it again. She tries a third egg yolk. Again she removes the yolk and inserts the caramel and it works this time. Eloise manages to plate her dish up in time and takes it in to the judges. The judges think the presentation is a little sloppy. They taste the dish. George says the panna cotta is grainy. The honeycomb is bitter. The parsnip bark is also a little bitter.

It’s time for Ben to plate up his dish. Ben removes some egg from the yolk and inserts the caramel into the yolk. He is happy with how it is looking. As he lifts it on to the plate with shaking hands he splits the egg. He grabs another yolk and fills it. He transfers it successfully onto the plate. Time runs out an Ben’s dish looks like a complete mess. He is really disappointed with himself. Will Ben be eliminated tonight?

Ben takes his dish in to the judges for tasting. Kylie says he has filled the yolk well with caramel. Gary says the flavour of the caramel and panna cotta is good. George says the honeycomb is still stuck in his teeth. It’s time to find out who is going home.

Diana is safe tonight. It is now between Eloise and Ben. Ben is safe. Eloise has been eliminated from Masterchef tonight.