Tonight on Masterchef one contestant will be eliminated in the semi finals. The three final contestants Elena, Harry and Matt will be competing in a service challenge. The contestants have been told in advance what the challenge is so they have already planned their menus. They arrive at Masterchef headquarters and are greeted by the judges. Gary tells them if they make it through today then they’ll be through to the grand final but one contestant will be eliminated. The contestants have 4 hours to get ready for service. They will be judged on the tastiness of their dishes as well as performance in the kitchen and getting their dishes out on time. They will be mentored in the kitchen today by Shannon Bennett.

Time starts. All of the contestants run to their benches. Matt is making a confit duck and a brioche doughnut. Elena is doing an Australian version of niciose salad and for her second dish apples, biscuits and cheese. Elena is making a green apple sorbet. Harry is making a lobster canneloni with a lobster sauce and a tiramisu. Matt is making a coffee ice-cream. Elena has boiled her eggs and is peeling them. Harry cuts his lobsters up and gets his lobster sauce on to cook. Elena is worried as her egg peeling took longer than she thought. She gets her fresh tuna out of the fridge and starts cutting it up. Matt starts cutting up his ducks to take the legs off, he is going to confit them. Harry cuts up a King fish for a mousse. Shannon questions his choice of fish as it’s quite a fatty fish. The contestants have 2 and half hours to go. Elena makes her tomato sauce and an olive tapenade. Matt finally finishes cutting up his duck and puts it into the oven. He now gets on to his duck sauce. Harry rolls his pasta out and fills it with his fish/lobster mousse. Elena is peeling potatoes for her salad and she is really worried about getting everything on time. Matt is also really conscious of running out of time. He begins preparing his baby beets but has 100 to prepare. Harry gets two layers of his tiramisu done and into the blast chiller. Harry is cleaning and preparing his artichokes, they are taking him a really long time. He considers leaving them off the dish. Shannon tells him if they’re on the menu then he has to get them done. The guests start filling the Masterchef restaurant, the contestants have only 15 minutes of preparation time left. Harry runs to the pantry and grabs some brussel sprouts to add to his dish. Matt starts frying his chicken legs in a pan to crisp up the skin. There’s 5 minutes until service time. Elena is still running out of time and she is very stressed. Service time starts. 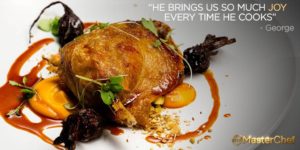 Matt plates up his first four dishes and sends them out to the judges. The judges love the golden colour on the skin. Gary says it’s absolutely yum. George says he has no negative comments on the dish, but to thank Matt for the delicious dish. Gary is very impressed with the techniques he has used. Harry sends his dishes out to the judges. The judges taste his dish. Gary says he cannot taste the lobster. The judges comment that they thought Harry was making a sauce. George walks over to Harry’s bench and tastes the sauce he has in his squeezy bottle. Harry has been very conservative with his use of the sauce on the dish as he was worried he wouldn’t have enough. George asks Shannon if they can have some sauce on their dish. They taste it with more sauce and they love it. They say it’s a shame he hasn’t put more sauce on the dish. George says he has also used the wrong fish and it’s too oily. Matt says it’s a good dish. Finally Elena starts plating up her dish. The judges are impressed with how the dish looks. Gary comments that the dish doesn’t really look moist enough. They taste the dish. George loves that she has made an Aussie version of a French salad. She has cooked the tuna perfectly. George loves the bush tomato sauce. Matt says it’s a really nice and fresh modern dish.

Matt is getting ready to serve his desserts. He gets the brioche doughnuts into the deep fryer. Harry is making his ice-cream using the dry ice. Matt gets started on his lemon curd, he is going to pipe the lemon curd into the doughnuts. Harry cuts his dessert up into large square slices. Matt is having trouble getting his lemon curd to thicken, he adds some butter to try and help it thicken. Shannon can see he is having problems, he tells Shannon that he has added some butter already and Shannon tells him that the butter will stop it thickening and to start again. Matt is relieved as his second batch of lemon curd has finally thickened.

Matt is the first one to send his dishes out to the judges. The judges taste his dish. They all love it and it puts a smile on their faces. Gary loves the texture of the doughnut and the coffee ice-cream. George says it’s great cooking and Gary would like another one. Elena’s dish goes out to the judges. The judges are really impressed with how the dish looks then they taste it. Gary says he was expecting something savoury but it’s lovely and sweet and he loves it. George says he hasn’t tasted anything like this before. Matt loves the little ginger biscuits, he thinks it’s a top dessert. Harry’s dish goes out to the judges. They taste the dish. Gary says it is not what he expected at all. Matt says it tastes like tiramisu and it’s a sophisticated dessert. George says its tiramisu on a whole other level.