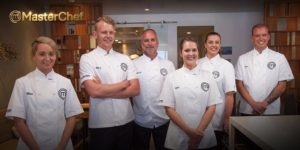 Tonight on Masterchef California week continues with a pressure test at the restaurant of Dominque Crenn. Trent cooked the dish of the day yesterday so he will not be cooking today. George tells the contestants today’s challenge is part pressure test and part team challenge. The contestants pulls knives out of the blocks which decides which team they will be in. One team is Harry, Brett and Elise. The other team is Mimi, Matt and Elena. Gary reveals the two dishes they will be cooking today. The first dish is called a walk in the forest. The second dish is called the beet. The contestants get to taste the dishes and are very impressed.

They have 2 hours and 45 minutes to re-create the dishes. Then they have 15 minutes to plate up and present their dishes. 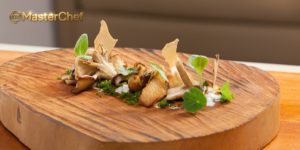 Time starts and the teams begin reading the recipes. Brett gets started on the mushroom dish, Elise gets started on the dessert and Harry is helping out. Mimi gets started on the dessert and Matt and Elena are working on the mushroom dish. Mimi and Elise are peeling the beets to make the beetroot juice and Mimi is rushing, her hand slips and she cuts herself. Brett and Harry are making a mushroom puree which will then make some mushroom paper. Elise is supposed to let her beetroot juice cool before she blends it but decides to ignore the instruction and the juice spurts out of the blender. Elise decides that she needs some help with the dessert so she asks Harry to assist her. Elena also heads to the dessert kitchen to help Mimi. Elena starts on the chocolate crumble. Elise has made her chocolate crumble but it has not worked out. She needs to make it again. Harry puts his mushroom paper into the oven and notices that the acetate it was on shrivels up. Harry notices that the oven was on too high that’s why it melted the acetate. He’ll need to make the whole mushroom paper mix again. There is only 30 minutes to go and Harry was hoping to get time to help Elise. Mimi pipes her beetroot sorbet into a water balloon as it gives a perfect sphere shape. Harry finally gets a chance to go and help Elise. There’s only 15 minutes remaining. Matt is making some fluted mushrooms. Elise checks on her second batch of chocolate crumble and it’s not quite right again. She doesn’t have time to make another batch. Everyone is rushing to get the final elements of their dish ready for plating. Mimi and Elena have forgotten about the beetroot glaze. Time is up!

The teams now have 15 minutes to plate up their dishes. Elise, Harry and Brett start plating up the forest floor dish. Elise pipes the meringue onto the logs and toasts it using a blow torch. They complete the dish and they are really happy with how it looks. They take the dish out to the judges for them to taste. Dominque says the flavours are well balanced. They judges really enjoy the dish. Now Matt, Mimi and Elena get time to plate up their forest floor dish. They take their dish out to the judges. Matt says the basil crumb is fantastic. Dominque says she is getting a lot of meringue and George comments that it wasn’t toasted enough. All of the other judges agree.

It’s time for Brett, Elise and Harry to plate up their dessert. Brett is having trouble glazing the sorbet spheres as they’re melting. They finish plating up the dish and take it out to the judges. Dominque says she is not crazy about the texture of the dish. Matt says the beetroot sorbet it too soft. George agrees that the whole dish has too many wet ingredients. Dominque says the dish is not balanced for her.  Finally Matt, Mimi and Elena start plating up their dish. Matt needs to quickly make the beetroot glaze that they forgot to make earlier in prep time. It works and they dip the spheres into the glaze. They complete their dish and take it out to the judges. Dominique says wow, it’s not too sweet and its lovely and crunchy. She is really really impressed. George says it is an incredible and balanced dessert. 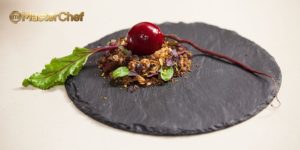