Tonight was the first mystery box challenge on Masterchef Australia 2014. The winner will choose the “theme” in the invention test and the top three winners in the invention test will be safe from elimination. At the start of the night Matt explained that someone had to leave the show due to ill health and that a previous contestant, Georgia, will take over from that contestant.

SPOILER, we will be revealing the contestants who are safe further down. 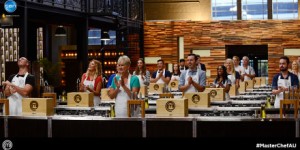 The previous Masterchef Australia contestants picked the 5 different ingredients in the mystery box. They then chose the dishes which they wanted to taste and Nick won the competition. He was able to choose the theme that the contestants would cook for the invention test. He had a choice of “past”, “present” and “future”. He decided to choose “past”.

The top three dishes of this next challenge will be safe from elimination. There were some amazing dishes and there were quite a few blunders. Scott only served a small pile of potatoes after leaving the rest of his dish in the pan and Sam only plated a cup of sauce. She had put her ravioli into boiling water with only a few minutes left on the clock. Unfortunately this stopped the water boiling and it didn’t resume until after the time was up.

There were quite a few amazing dishes for the first round of Masterchef, but there could be only three winners. The following contestants are safe from elimination tomorrow night: